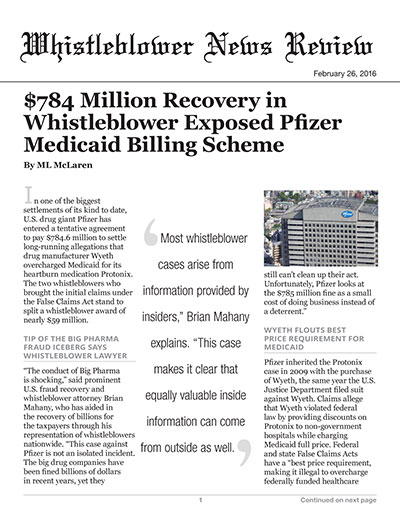 In one of the biggest settlements of its kind to date, U.S. drug giant Pfizer has entered a tentative agreement to pay $784.6 million to settle long-running allegations that drug manufacturer Wyeth overcharged Medicaid for its heartburn medication Protonix. The two whistleblowers who brought the initial claims under the False Claims Act stand to split a whistleblower award of nearly $59 million.

“The conduct of Big Pharma is shocking,” said prominent U.S. fraud recovery and whistleblower attorney Brian Mahany, who has aided in the recovery of billions for the taxpayers through his representation of whistleblowers nationwide. “This case against Pfizer is not an isolated incident. The big drug companies have been fined billions of dollars in recent years, yet they still can’t clean up their act. Unfortunately, Pfizer looks at the $785 million fine as a small cost of doing business instead of a deterrent.”

Pfizer inherited the Protonix case in 2009 with the purchase of Wyeth, the same year the U.S. Justice Department filed suit against Wyeth. Claims allege that Wyeth violated federal law by providing discounts on Protonix to non-government hospitals while charging Medicaid full price. Federal and state False Claims Acts have a “best price requirement, making it illegal to overcharge federally funded healthcare programs for prescription drugs. Pharmaceutical companies are required to offer their lowest prices to Medicare, Medicaid and other such programs.

Protonix acts to repair damage to the lining of the esophagus caused by acid reflux. Though a dozen cheaper pantoprazole generics are on the market today, the claims originate from the years between 2001 and 2006 when Wyeth’s Protonix patent gave it market exclusivity.

The Justice Department has estimated the total losses in taxpayer dollars could be in excess of $2 billion. The settlement is not an admission of Wyeth’s liability in this case. According to the Wall Street Journal, a Boston federal court trial is set for March 7.

This isn’t the first settlement involving Wyeth and Protonix. Pfizer paid $55 million in December 2012 to settle claims that Wyeth marketed Protonix for off-label uses not approved by the Food and Drug Administration.

The investigation originated from two whistleblower lawsuits filed against Wyeth by Louisiana physician, Dr. William LaCorte, and a former AstraZeneca sales rep, Lauren Kieff, who stand to collect nearly $59 million for bringing the initial claims against Pfizer. Dr. LaCorte discovered Wyeth’s fraudulent pricing scheme through his New Orleans hospital while Kieff learned of the activity through speaking with hospital pharmacists.

“Most whistleblower cases arise from information provided by insiders,” Brian Mahany explains. “This case makes it clear that equally valuable inside information can come from outside as well.”

“Whistleblowers provide a valuable public service by standing up to corporate greed,” according to Brian Mahany. “The actions of Kieff and LaCorte will save taxpayers millions of dollars and help ensure that medical decisions are based on patient need and not on who is offering the biggest rebate.”