Inside Counsel
by Ed Silverstein, August 27 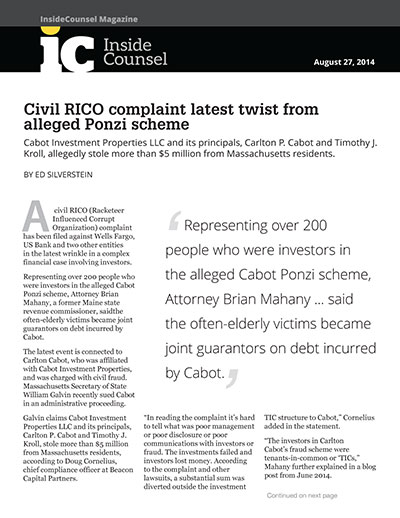 A civil RICO (Racketeer Influenced Corrupt Organization) complaint has been filed against Wells Fargo, US Bank and two other entities in the latest wrinkle in a complex financial case involving investors.

The latest event is connected to Carlton Cabot, who was affiliated with Cabot Investment Properties, and was charged with civil fraud. Massachusetts Secretary of State William Galvin recently sued Cabot in an administrative proceeding.

“In reading the complaint it’s hard to tell what was poor management or poor disclosure or poor communications with investors or fraud. The investments failed and investors lost money. According to the complaint and other lawsuits, a substantial sum was diverted outside the investment TIC structure to Cabot,” Cornelius added in the statement.

“The investors in Carlton Cabot’s fraud scheme were tenants-in-common or ‘TICs,” Mahany further explained in a blog post from June 2014.

The TICs were income-producing securities, and come about as the Internal Revenue Service allows investors to pool money.

“Here, the TICs not only invested their own money, many unwittingly borrowed money and signed personal guaranties,” Mahany said in the blog post.

Galvin also cautions that Cabot came up with a “non-existent relationship with Cabot Properties,” according to news reports. Cabot Properties is a Boston real estate and development firm, Galvin said.

Mahany claims that borrowers, most of whom are elderly, had accounts that included their life savings. Allegedly, the conspiracy left the borrowers with nothing.

The case claims US Bank, Wells Fargo and CW also failed to advise the borrowers of defaults under the terms of loan documents. Nor were they informed of theft and diversion of funds. Fees were high as well. In the second conspiracy, cross-defendants tried to seize control of the property.

The plaintiffs are seeking damages, punitive damages and attorneys’ fees.

“We represent approximately 200 victims of Carlton Cabot,” Mahany said in his blog post. “At least one client is in her 90′s and many are quite elderly. Even if regulators are successful in getting back some money or putting Carlton Cabot behind bars where he belongs, nothing can buy back time. The older you get, the more time matters.”

As of June, various state and federal authorities were investigating Cabot’s actions.

“How can anyone let themselves be fooled into signing up for personal liability on real estate investments sold for upwards of $50 million?” Mahany asked in the blog post. “Easy! Bury the guaranties in small font, produce slick marketing materials that claim the investment is ‘non-recourse,’ and assume that most stockbrokers who sold these investments will be so lured by the high commissions offered that they won’t conduct any meaningful due diligence.”