Fake “Made in USA” components used at Miami Intermodal

According to whistleblower suit, many of the components were manufactured in China 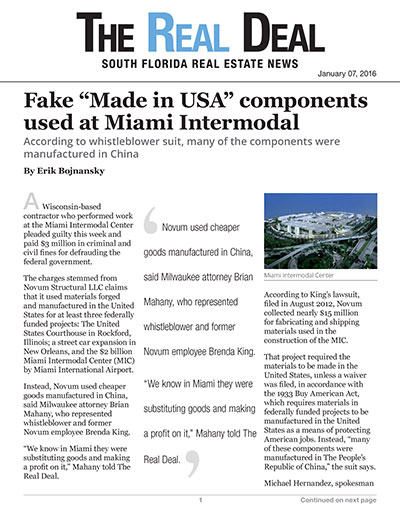 A Wisconsin-based contractor who performed work at the Miami Intermodal Center pleaded guilty this week and paid $3 million in criminal and civil fines for defrauding the federal government.

The charges stemmed from Novum Structural LLC claims that it used materials forged and manufactured in the United States for at least three federally funded projects: The United States Courthouse in Rockford, Illinois; a street car expansion in New Orleans, and the $2 billion Miami Intermodal Center (MIC) by Miami International Airport.

“We know in Miami they were substituting goods and making a profit on it,” Mahany told The Real Deal.

According to King’s lawsuit, filed in August 2012, Novum collected nearly $15 million for fabricating and shipping materials used in the construction of the MIC.

That project required the materials to be made in the United States, unless a waiver was filed, in accordance with the 1933 Buy American Act, which requires materials in federally funded projects to be manufactured in the United States as a means of protecting American jobs. Instead, “many of these components were manufactured in The People’s Republic of China,” the suit says.

Michael Hernandez, spokesman for Miami-Dade Mayor Carlos Gimenez, said the MIC was a project overseen by the Florida Department of Transportation. FDOT spokeswoman Maribel Lena did not return a phone call from TRD.

Based in Menomonee Falls, Wisconsin, Novum Structures specializes in the design and construction of glass space frames used for roofs and atrium enclosures, according to a press release from the United States’ Department of Justice. Travis Loften, Novum’s vice president, said in a statement that his company accepts “full responsibility for our actions” and vows to “fully comply with contractual requirements going forward.”

“It is important to note that the noncompliance relates solely to the country of origin of the products. At no time was there an issue with the quality of materials used. Novum has taken action to resolve the vast majority of non-compliance issues on all projects, including the Miami Intermodal Center,” he said in the statement. “Today, the MIC is in full compliance with Buy America requirements.”

Loften also said that “non-compliant materials represented less than 3 percent of the value of work Novum did on projects subject to the Buy American requirements,” according to the statement.

A resident of Hubertus, Wisconsin, Brenda King worked at Novum as an expeditor from 2004 to 2012. In her whistleblower lawsuit, King claimed she “frequently spoke with officers and managers of Novum regarding components made outside the United States.” In November 2011, according to the lawsuit, the company’s president and owner, Ian Collins, specifically told King and a colleague “that it was the project managers’ responsibility to lie if caught.”

During that same month (November 2011), Collins told King to “falsify a quality manual for the Miami Intermodal Center to indicate that the company was following a 100 percent traceability standard of all components to insure that all components were made in the United States,” the suit says.

King also witnessed employees repackaging components to make them appear they were made in the U.S. After complaining to her supervisor, King filed a whistleblower lawsuit under the False Claims Act. Her suit was soon taken over by the U.S. Attorney’s Office for the Eastern District of Wisconsin.