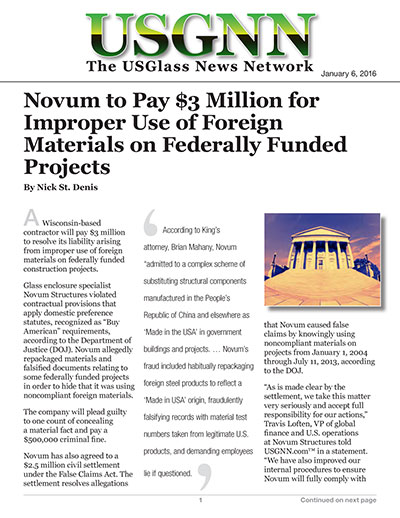 A Wisconsin-based contractor will pay $3 million to resolve its liability arising from improper use of foreign materials on federally funded construction projects.

Novum has also agreed to a $2.5 million civil settlement under the False Claims Act. The settlement resolves allegations that Novum caused false claims by knowingly using noncompliant materials on projects from January 1, 2004 through July 11, 2013, according to the DOJ.

“As is made clear by the settlement, we take this matter very seriously and accept full responsibility for our actions,” Travis Loften, VP of global finance and U.S. operations at Novum Structures told USGNN.com™ in a statement. “We have also improved our internal procedures to ensure Novum will fully comply with contractual requirements going forward.”

The allegations were originally brought by ex-employee Brenda King under the whistleblower provisions of the False Claims Act.

According to King’s attorney, Brian Mahany, Novum “admitted to a complex scheme of substituting structural components manufactured in the People’s Republic of China and elsewhere as ‘Made in the USA’ in government buildings and projects. … Novum’s fraud included habitually repackaging foreign steel products to reflect a ‘Made in USA’ origin, fraudulently falsifying records with material test numbers taken from legitimate U.S. products, and demanding employees lie if questioned.”

Construction projects funded by the U.S. government are normally subject to laws requiring the use of domestic materials, such as the Buy American Act; the Federal Transit Administration’s Buy America provision; and section 1605 of the American Recovery and Reinvestment Act. The contracts involved in this case covered government buildings and transit projects partially paid for with federal funds.

“It is important to note that the noncompliance relates solely to the country of origin of the products. At no time was there an issue with the quality of materials used,” said Loften. “We have taken action to resolve the vast majority of the noncompliance issues, in many cases replacing non-compliant foreign-sourced products with Buy American-compliant counterparts.

The False Claims Act permits private parties to sue on behalf of the government those who falsely claim federal funds. The act also allows the whistleblower to receive a share of any funds recovered through the lawsuit. King will receive approximately $400,000 as her share of the civil settlement.

“When taxpayer dollars are provided for construction projects, the government expects contractors to comply with all requirements, including ones that ensure the money remains in the U.S. economy,” said principal deputy assistant attorney general Benjamin C. Mizer, head of the Justice Department’s Civil Division, in a statement. “This settlement shows that the Department of Justice is committed to pursuing claims against contractors that put financial gain ahead of complying with the law.”

Loften said Novum “look[s] forward to putting this issue behind us and continuing to provide the same high level of customer service and quality that our clients have come to expect.”