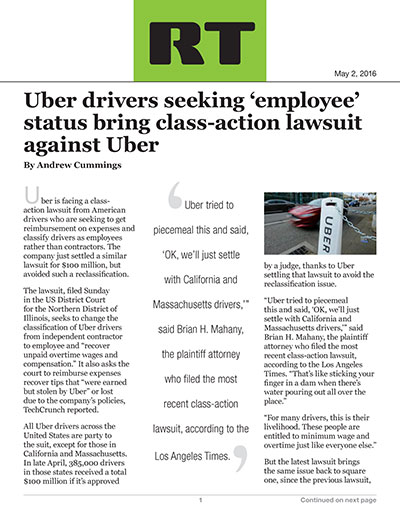 Uber is facing a class-action lawsuit from American drivers who are seeking to get reimbursement on expenses and classify drivers as employees rather than contractors. The company just settled a similar lawsuit for $100 million, but avoided such a reclassification.

The lawsuit, filed Sunday in the US District Court for the Northern District of Illinois, seeks to change the classification of Uber drivers from independent contractor to employee and “recover unpaid overtime wages and compensation.” It also asks the court to reimburse expenses recover tips that “were earned but stolen by Uber” or lost due to the company’s policies, TechCrunch reported.

All Uber drivers across the United States are party to the suit, except for those in California and Massachusetts. In late April, 385,000 drivers in those states received a total $100 million if it’s approved by a judge, thanks to Uber settling that lawsuit to avoid the reclassification issue.

“Uber tried to piecemeal this and said, ‘OK, we’ll just settle with California and Massachusetts drivers,’” said Brian H. Mahany, the plaintiff attorney who filed the most recent class-action lawsuit, according to the Los Angeles Times. “That’s like sticking your finger in a dam when there’s water pouring out all over the place.”

“For many drivers, this is their livelihood. These people are entitled to minimum wage and overtime just like everyone else."

But the latest lawsuit brings the same issue back to square one, since the previous lawsuit, which took over three years to settle, set no precedent due to being settled out of court.

Uber has fought numerous legal battles with its drivers over the issue of contractor vs employee classification, which could potentially make or break Uber’s business model.

Employees – and not independent contractors – are eligible for unemployment compensation and workers’ compensation benefits, and must be paid in accordance with state wage and hour laws which can include overtime pay.

The company argues that it merely operates a software platform that connects drivers and passengers and doesn’t control hours or schedules like an employer would. The legal consequences of losing the nationwide lawsuit could include a negative effect on other apps such as GrubHub, Lyft and Instacart, according to Michigan IT Law.

“Nearly 90 percent of drivers say the main reason they use Uber is because they love being their own boss,” Uber said about the lawsuit in a statement. “As employees, drivers would have set shifts, earn a fixed hourly wage, and lose the ability to drive with other ridesharing apps – as well as the personal flexibility they most value.”

In addition to the previous litigation in California and Massachusetts, Uber faces or has faced other state-specific lawsuits around the country claiming that it violated state labor laws. Cases in Florida and Illinois have yet to reach a conclusion, while cases in Georgia, New York and Texas were rejected by judges.