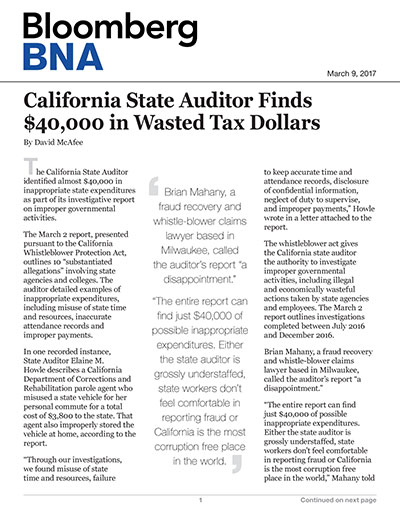 The California State Auditor identified almost $40,000 in inappropriate state expenditures as part of its investigative report on improper governmental activities.

In one recorded instance, State Auditor Elaine M. Howle describes a California Department of Corrections and Rehabilitation parole agent who misused a state vehicle for her personal commute for a total cost of $3,800 to the state. That agent also improperly stored the vehicle at home, according to the report.

“Through our investigations, we found misuse of state time and resources, failure to keep accurate time and attendance records, disclosure of confidential information, neglect of duty to supervise, and improper payments,” Howle wrote in a letter attached to the report.

Brian Mahany, a fraud recovery and whistle-blower claims lawyer based in Milwaukee, called the auditor’s report “a disappointment.”

“The entire report can find just $40,000 of possible inappropriate expenditures. Either the state auditor is grossly understaffed, state workers don’t feel comfortable in reporting fraud or California is the most corruption free place in the world,” Mahany told Bloomberg BNA in a March 3 email. “I certainly don’t want to be critical of the auditor but there is plenty more fraud out there. We hear horror stories from government workers on a daily basis. Many of them from California.”

The report also describes a California Department of Transportation (Caltrans) analyst who misused state time by “taking excessive breaks and extended lunches during her workdays.” The auditor’s office estimates that the analyst misused an average of 130 hours of state time between July 2015 and March 2016, costing taxpayers approximately $4,300.

Also in the report is a library employee at California State University, Fresno, who misused the school’s resources during a 13-month period. He allegedly visited more than 48,000 online game and video webpages unrelated to his work, costing the university as much as $22,200.

Mahany said California and all other states need to do “much more so that workers feel empowered to step forward and report mismanagement, corruption and fraud.”

“And officials that retaliate against those whistleblowers need to face swift justice,” Mahany said. “Until that happens, we simply must hope that the auditor stumbles across more than a single employee who uses a work vehicle for personal use.”

Curtis Kalin, a spokesman for Citizens Against Government Waste, said the findings of the audit are “appalling for California taxpayers.”

“This type of blatant government waste is the inevitable result of poor oversight and lax safeguards,” Kalin told Bloomberg BNA. “Taxpayers should take some solace that whistleblowers are coming forward and the auditor’s office is doing the best it can to expose wasteful spending practices after they occur.”

Taxpayers “should not be satisfied until these improper payments and episodes of misconduct are halted,” Kalin said. “The sad reality is that every taxpayer dollar wasted is a dollar not spent on the critical functions of state government. All Californians should expect their government to spend their money wisely and not allow $40,000 of it to be frivolously squandered.”