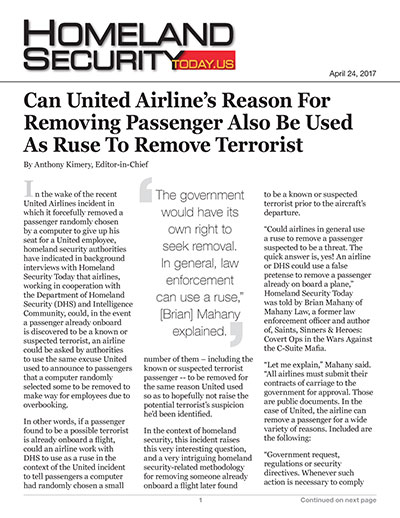 In the wake of the recent United Airlines incident in which it forcefully removed a passenger randomly chosen by a computer to give up his seat for a United employee, homeland security authorities have indicated in background interviews with Homeland Security Today that airlines, working in cooperation with the Department of Homeland Security (DHS) and Intelligence Community, could, in the event a passenger already onboard is discovered to be a known or suspected terrorist, an airline could be asked by authorities to use the same excuse United used to announce to passengers that a computer randomly selected some to be removed to make way for employees due to overbooking.

In other words, if a passenger found to be a possible terrorist is already onboard a flight, could an airline work with DHS to use as a ruse in the context of the United incident to tell passengers a computer had randomly chosen a small number of them – including the known or suspected terrorist passenger -- to be removed for the same reason United used so as to hopefully not raise the potential terrorist's suspicion he'd been identified.

In the context of homeland security, this incident raises this very interesting question, and a very intriguing homeland security-related methodology for removing someone already onboard a flight later found to be a known or suspected terrorist prior to the aircraft’s departure.

“Could airlines in general use a ruse to remove a passenger suspected to be a threat. The quick answer is, yes! An airline or DHS could use a false pretense to remove a passenger already on board a plane,” Homeland Security Today was told by Brian Mahany of Mahany Law, a former law enforcement officer and author of, Saints, Sinners & Heroes: Covert Ops in the Wars Against the C-Suite Mafia.

“Let me explain,” Mahany said. “All airlines must submit their contracts of carriage to the government for approval. Those are public documents. In the case of United, the airline can remove a passenger for a wide variety of reasons. Included are the following:

“Whenever refusal or removal of a passenger may be necessary for the safety of such passenger or other passengers or members of the crew.

“Whenever such action is necessary or advisable by reason of weather or other conditions beyond UA’s control including, but not limited to, acts of God, force majeure, strikes, civil commotions, embargoes, wars, hostilities, terrorist activities or disturbances, whether actual, threatened or reported.”

And, “The government would have its own right to seek removal. In general, law enforcement can use a ruse,” Mahany explained.

Mahany said, “Airlines can legally collect your money, sell you a ticket and then deny you a seat if they have overbooked a flight. Frequent flyers encounter overbooked flights all the time. When an airline can't find a volunteer, it resorts to its published tariffs and rules (fine print) for overbooked flights.”

United's Rule 25, Denied Boarding Compensation, sets forth United's responsibilities for overbooked flights,” Mahany said, noting, “the rule goes into great detail as to how the airline must respond if it wishes to ‘deny boarding’ on an oversold flight.”

“Here’s the flaw in [its recent] passenger removal – he had already boarded!” Mahany said, pointing out that, “Nothing in the rule allows United to remove a passenger who is already on the plane.”

“Other rules allow airlines to remove passengers from planes, i.e. refusal of transport,” he continued, saying, “United can refuse service for a wide variety of reasons and can even forcibly remove a passenger but only in certain circumstances including being unruly, drunk, not complying with Transportation Security Administration security screening, not having proper ID, smoking, bad body odor, inappropriate clothing and failure to obey instructions of crew members.”

“Can United have police remove a passenger because he won't give up his seat? Probably not,” Mahany said. However, he added, “Implied in the rule is that instructions from crew members must be lawful. Since United's overbooking policy only applies to denied boarding, once on the plane the airline doesn't have much room to order a passenger off the plane unless they are belligerent, threatening or violent.”