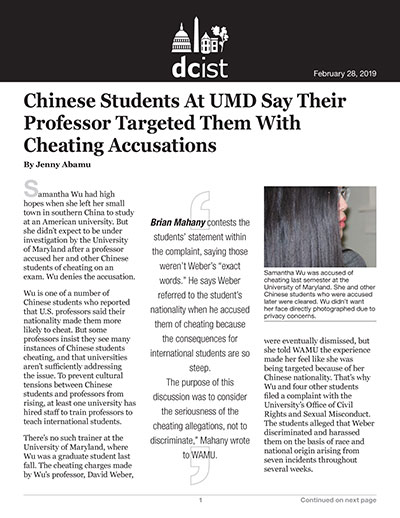 Samantha Wu had high hopes when she left her small town in southern China to study at an American university. But she didn’t expect to be under investigation by the University of Maryland after a professor accused her and other Chinese students of cheating on an exam. Wu denies the accusation.

There’s no such trainer at the University of Maryland, where Wu was a graduate student last fall. The cheating charges made by Wu’s professor, David Weber, were eventually dismissed, but she told WAMU the experience made her feel like she was being targeted because of her Chinese nationality. That’s why Wu and four other students filed a complaint with the University’s Office of Civil Rights and Sexual Misconduct. The students alleged that Weber discriminated and harassed them on the basis of race and national origin arising from seven incidents throughout several weeks.

After an initial assessment, the university opened an investigation into the merits of these allegations.

What Happened To Chinese Students At UMD

According to Wu, when Weber brought up the cheating accusations to the class, “He said, you cheated your way into the University of Maryland, but you chose to study in America, so in America, we don’t allow you to do that anymore.”

Within the complaint, multiple students, including Wu, wrote that Weber told the class, “All Chinese students cheat their way into the U.S. and the University of Maryland … This is not your home, you all cheat in your home…You will have to go back home, and never come to the United States again … Your visas will be revoked.”

Weber says he welcomed the opportunity to discuss these issues with WAMU but claims he did not have permission from the university’s counsel to speak with reporters. But he did send a statement to WAMU through his attorney, Brian Mahany.

Mahany contests the students’ statement within the complaint, saying those weren’t Weber’s “exact words.” He says Weber referred to the student’s nationality when he accused them of cheating because the consequences for international students are so steep.

Students found guilty of cheating at the University of Maryland receive an “XF” on their transcripts, which means they failed because of academic dishonesty. They can also be expelled from school. International students would likely lose their visas, making it unlawful for them to remain in the country.

“The purpose of this discussion was to consider the seriousness of the cheating allegations, not to discriminate,” Mahany wrote to WAMU.

Following the suspected cheating, Weber invalidated all of the students’ exams last fall and gave them the option to take another test or use their midterms as a final grade. Then he and another professor co-signed an online notice to students in the same course. In it, they wrote that students appeared to be more focused on their grades than “the integrity of the profession,” attributing that opinion, in part, to their culture. The majority of students in the class are Chinese.

Weber says the verbal and written statements were taken out of context. Wu says the messages were offensive to her and other Chinese students.

The Professor Sees A ‘Great Increase In Academic Dishonesty’

The cheating charges against Wu and the other students were forwarded to the University of Maryland’s Office of Student Conduct. According to Wu, one Chinese student pleaded guilty, and another case is still under investigation. Wu and four other students were cleared, according to Wu. The University of Maryland wouldn’t comment on the status of individual cases.

The university initially asked Weber to not teach classes after five students, including Wu, reported his statements to the school’s Office of Civil Rights & Sexual Misconduct. But now he is back teaching on campus.

“I believe that culture and upraising does play a role in cheating…Does that mean that Chinese students are more prone to cheat? No,” Weber continued.

Weber has been teaching for 11 years and says he’s received positive feedback during most of his tenure as a teacher. He also says that he received positive reviews from students in his forensic auditing class before the final exam.

But Weber says he saw more instances of cheating while teaching the graduate accounting courses at UMD than in other programs in he taught at the school. The vast majority of the students in the program are Chinese nationals, and he says that this is the first time he has taught that many Chinese international students.

“I believe that culture and upraising does play a role in cheating,” Weber wrote to WAMU, noting that he also worked as a senior federal law enforcement official before teaching and was involved in a number of major international fraud matters, including some in China. “There is no question that there is a different rule-following and rule-breaking culture between the U.S. and China.”

“Does that mean that Chinese students are more prone to cheat? No,” Weber continued. “It isn’t proper to label an entire group of students based on nationality as being ‘cheaters.’ That isn’t fair to the many Chinese students who don’t cheat.”

Weber says he intended to uphold the academic honesty policies at the University of Maryland, but that the university hasn’t adequately supported professors.

“It is my fear that, despite the honor code, the school administration will not always support faculty members who report cheating, in contrast to what the policy actually says,” wrote Weber. “This is especially when the program in which cheating occurs is one of the most profitable programs for the university.”

Officials from the University of Maryland said they couldn’t discuss the details of the investigation but sent a statement saying: “Academic integrity is paramount. Reported accusations of cheating or racial discrimination in the classroom are investigated, and neither is tolerated. It is important to report matters so that we can follow our processes to ensure due process for all involved and any wrongdoing can be addressed swiftly and appropriately.”

Despite the cheating allegations, Samantha Wu graduated in December 2018. She’s currently looking for a job so she can remain in the country.

Students At Other U.S. Institutions Speak Up

Weber isn’t the only professor who says he’s experiencing more instances of cheating among Chinese students. In December, the Los Angeles Times ran a story about a similar issue. Professors at the University of California, Santa Barbara said cheating is a major concern among Chinese students. A Chinese student group at the school also felt targeted by the way a professor addressed the issue. In response, UC Santa Barbara officials encouraged professors to report cheating, but stressed that they shouldn’t racially profile students while doing it.

It’s difficult to quantify how often cheating accusations involve Chinese students. Officials from the University of Maryland say they don’t track the nationality of students reported to the Office of Student Conduct for cheating. But at UC Santa Barbara, professors were told Chinese students made up six percent of the student body but accounted for one-third of the plagiarism instances, according to the Los Angeles Times report.

The Mystique Of Chinese Students

“I feel that we are a mystery to Americans, but not in a good way,” Wu says.

Gabriela Valdez is the first director of global curriculum at the University of Arizona, where she trains faculty on how to teach international students. After a large influx of international students, particularly many from China, the university brought her on to help professors. She has also researched the experiences of Chinese students in American universities.

“Issues of academic integrity are definitely different in the way that they are handled for Chinese international students than for non-Chinese students,” Valdez says.

She says there’s a stigma about cheating, particularly in the form of plagiarism, that some professors have accepted about the Chinese student population. Valdez attributes some of this stigma to the education system in China, which she says rewards memorization.

Samantha Wu, the graduate student from the University of Maryland, says she thinks part of the tensions between professors and Chinese students comes from the lack of exposure Americans have to Chinese culture and the negative press that U.S.-Chinese relations receive.

“I feel that we are a mystery to Americans, but not in a good way,” Wu says.

What Does The Research On Chinese Student Experiences Reveal?

Valdez saw multiple instances of professors stereotyping Chinese students as cheaters in her research. She says accusations of cheating that target Chinese students as a group can lead to increased tensions and distrust between students and the university system as a whole.

She expects this issue to show up more often as schools actively recruit more students from abroad, particularly from China.

The the business school at the University of Maryland is made up of more international students than American ones, and most are from China. Across the United States, more than 363,000 Chinese students enrolled in colleges for the 2017-2018 school year, according to the Institute of International Education. That’s about one-third of all international students in the country, making Chinese nationals the largest group.

A Lesson In Cultural Sensitivity For University Professors

Valdez says many professors aren’t prepared to work with the large numbers of international students in their institutions.

“You have faculty members, many of them with no international experience at all, [with] very limited professional development in regards to teaching the diverse student body and then…you add these international students who come from a very different educational system,” Valdez says.

But she has implemented some quick fixes professors can use to make international students feel included instead of targeted. For example, she has been training faculty members on how to design tests so non-native English speaking students can show their understanding.

“It’s very common to have a very high portion of a specific class final grade to be placed on oral presentation,” Valdez explains.

“So maybe just diversifying those classroom activities would be a great way to have an inclusive experience for all students in the classroom,” she says.

Right now, the University of Maryland does offer faculty some training on teaching international students, which is also included in some of the staff’s orientations. But the school doesn’t have a dedicated staff member who is offering them more in-depth support like Valdez at the University of Arizona.

Wu says it’s not just faculty who need more support. She thinks the school should do more to help international students understand what rights they have when confronted with instances of discrimination.