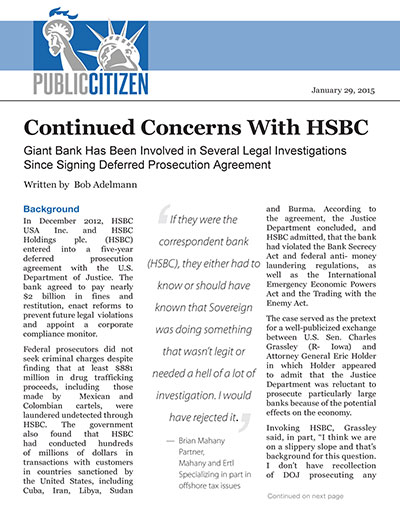 Federal prosecutors did not seek criminal charges despite finding that at least $881 million in drug trafficking proceeds, including those made by Mexican and Colombian cartels, were laundered undetected through HSBC. The government also found that HSBC had conducted hundreds of millions of dollars in transactions with customers in countries sanctioned by the United States, including Cuba, Iran, Libya, Sudan and Burma. According to the agreement, the Justice Department concluded, and HSBC admitted, that the bank had violated the Bank Secrecy Act and federal anti- money laundering regulations, as well as the International Emergency Economic Powers Act and the Trading with the Enemy Act.

The case served as the pretext for a well-publicized exchange between U.S. Sen. Charles Grassley (R- Iowa) and Attorney General Eric Holder in which Holder appeared to admit that the Justice Department was reluctant to prosecute particularly large banks because of the potential effects on the economy.

Invoking HSBC, Grassley said, in part, “I think we are on a slippery slope and that’s background for this question. I don’t have recollection of DOJ prosecuting any high-profile financial criminal convictions in either companies or individuals.”

Holder responded: “… the concern that you have raised is one that I, frankly, share. I’m not talking about HSBC here, that would be inappropriate. But I am concerned that the size of some of these institutions becomes so large that it does become difficult for us to prosecute them when we are hit with indications that if we do prosecute – if we do bring a criminal charge – it will have a negative impact on the national economy, perhaps even the world economy. I think that is a function of the fact that some of these institutions have become too large.

As part of the agreement, HSBC agreed to forfeit $1.26 billion, pay $665 million in civil penalties and enact reforms to ensure compliance with U.S. federal laws.

The judge overseeing the HSBC case required the bank to appoint and cooperate with a compliance monitor, who was tasked with evaluating the company’s implementation of the deferred prosecution agreement.7 The agreement said that the criminal investigation into HSBC could be reopened if the bank fails to fully comply with the agreement.

Loretta Lynch, the U.S. attorney for the Eastern District of New York, signed the deferred prosecution agreement with HSBC.9 In November 2014, Lynch was nominated to succeed Holder as attorney general. Her confirmation hearings began on January 28.

In an interview, CBS reporter John Miller said to Lynch with regard to the HSBC deal that “some would say that the message is if you break all the laws you can, until you get caught, you may have to pay a lot of money, but you’re not going to go to jail.”

In response, Lynch said, “That’s a very shortsighted view, I think, because in this case they’re obviously paying a great deal of money, but they also have had to literally turn their company inside out. And the message should be is that’s what you have to do.”

But more than two years after the deal was announced, there is evidence that the systemic changes that Lynch promised may not be materializing.

HSBC’s compliance monitor, Michael Cherkasky, was scheduled to submit a new annual review of the bank’s compliance with the DPA to the Justice Department on Jan. 20, 2015.

Peter Carr, a Justice Department spokesman, confirmed in an email to Public Citizen that the report was submitted but would not discuss its content. “We will provide information on the monitor’s report in our next status report in April,” Carr wrote. “We’ll decline to comment until that filing.”

However, a Wall Street Journal report earlier this month, citing unnamed sources, said that Cherkasky’s review would “criticize the bank and lay out ways it needs to improve.”

“Prosecutors have said the report, a synopsis of which is expected to be published in April, will focus on HSBC’s private banking and trade-finance businesses, as well as its operations in six locations including Malaysia, Hong Kong and the U.S.,” the Journal wrote.

The Journal further reported that some HSBC executives “question whether it is possible to stamp out money laundering entirely.”

The Journal wrote that HSBC is working on upgrading its computer systems and reported that the bank has hired “several thousand compliance staff,” but said that might not be enough to satisfy Cherkasky, citing comments from a profile the paper wrote in July 2014.

“If you put in place compliance that doesn’t allow you to be a sustainable business, it doesn’t work,” Cherkasky told the Journal in July. “Throwing bodies at it and putting your finger in the dike – that’s not a sustainable system.”

Last month, the Justice Department announced in a press release that the Internal Revenue Service had sent summonses to a number of companies, including HSBC, to “produce information about U.S. taxpayers who may be evading or have evaded federal taxes” by using “multi-jurisdictional offshore services provider” Sovereign Management & Legal Ltd, to “establish, maintain or conceal foreign accounts, assets and entities.”

The Justice Department reported in a press release that the IRS determined that “correspondent bank accounts” HSBC was holding for Sovereign Management’s banks in Hong Kong and Panama were “likely to have records of financial transactions between Sovereign and its clients in the United States.”

The Justice Department press release suggested that the main targets of its inquiry were U.S. taxpayers who availed themselves of Sovereign’s services to avoid paying taxes.23 However, HSBC’s decision to offer correspondent bank accounts for Sovereign is concerning.

The South China Morning Post reported earlier this month that “HSBC and Hong Kong were part of an international web of suspected tax evasion announced on the website of the U.S. Department of Justice.”

Brian Mahany, a former state revenue commissioner and assistant attorney general in Maine who now has a private law practice specializing in part in offshore tax issues, wrote a pair of items on the Sovereign inquiry on his blog, Due Diligence, subsequent to the Justice Department’s announcement.

“Long associated with tax evasion, offshore debit cards are a popular way for people with hidden assets to repatriate their money into the United States,” Mahany wrote of one of the products Sovereign advertises on its website. “Transferring money into your U.S. account would leave a paper trail but an anonymous debit card allows one to spend money in the United States and make ATM withdrawals with very little paper trail.”

Sovereign’s descriptions of its products on its website read like a playbook for evading detection by regulators. “Debit cards have become a very popular way to access offshore funds. Having a debit card linked to your account can be a great convenience, but can be dangerous since your privacy can be compromised because the card can be sourced back to your bank account to which it is linked,” the firm’s website says.

“A much better option is to use non-linked ‘pre-paid’ debit cards that can be conveniently funded from your bank account for a small fee, but cannot be linked in any way to the bank account itself because the two are completely different and maintained by different banks,” Sovereign’s website says. “Also these cards have the advantage of not having your name on the card, either imprinted on the front or magnetically encoded on the back so no paper trail is left behind when you use them at physical retail establishments.”

Public Citizen contacted Mahany to ask his opinion on whether HSBC, as a provider of correspondent bank accounts for Sovereign, should be viewed as an unwitting conduit to the company’s alleged tax evasion services or a complicit partner.

“Should HSBC have been scared about somebody like Sovereign? If I were their anti-money- laundering person, I would have said ‘stay away,’” Mahany told Public Citizen. “If they were the correspondent bank, they either had to know or should have known that Sovereign was doing something that wasn’t legit or needed a hell of a lot of investigation. I would have rejected it.”

Sovereign’s description of its practices “raises not just one red flag but dozens of red flags,” Mahany said.

A statement by Belgian prosecutors said HSBC’s private banking unit in Switzerland had engaged in “serious and organized tax fraud, money laundering and unlawful exercise of the profession of financial intermediary” from 2003 to the present.

“The Swiss bank is suspected of having knowingly eased and promoted fiscal fraud by making offshore companies available to certain privileged clients,” the statement said, “particularly in Panama and the Virgin Islands.” Those companies “do not have any economic activity and their sole purpose is to hide the assets of clients.”

On January 27, the United Kingdom’s Financial Conduct Authority (FCA) announced that HSBC was one of eleven financial institutions that had agreed to pay compensation to customers for selling them “unnecessary” insurance to cover fraudulent credit card usage.

The FCA wrote in a press release that the insurance “was unnecessary because the customer’s card issuer was typically responsible for any transactions” after the customer reported the card stolen or missing.

The Daily Mail reported that the banks had been selling insurance offered by Affinion, a company based in the United States, and that any customers who purchased these products between Jan. 2005 and August 2013 would be eligible for compensation.

“This sounds like fraud,” John Mann, a Labour Party Member of Parliament, told the British paper. “If this was any other walk of life they’d all be heading straight to prison.”

The government’s decision to offer HSBC a deferred prosecution agreement was remarkable in light of the egregious acts the bank had engaged in. To the extent that the agreement offered a silver lining for the public, it was that it promised to compel HSBC to enact reforms that would prevent the bank from acting wrongfully in the future.

The contents of this report suggest that the bank may have a long way to go to deliver on that promise.