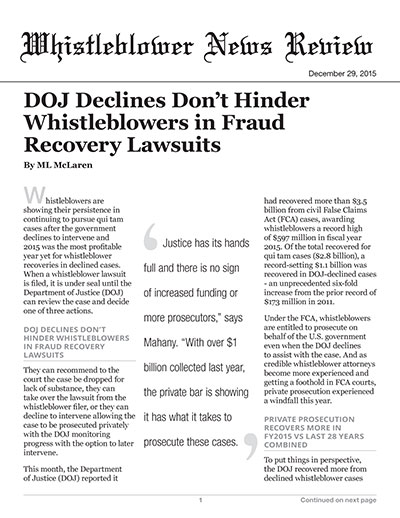 Whistleblowers are showing their persistence in continuing to pursue qui tam cases after the government declines to intervene and 2015 was the most profitable year yet for whistleblower recoveries in declined cases. When a whistleblower lawsuit is filed, it is under seal until the Department of Justice (DOJ) can review the case and decide one of three actions.

They can recommend to the court the case be dropped for lack of substance, they can take over the lawsuit from the whistleblower filer, or they can decline to intervene allowing the case to be prosecuted privately with the DOJ monitoring progress with the option to later intervene.

This month, the Department of Justice (DOJ) reported it had recovered more than $3.5 billion from civil False Claims Act (FCA) cases, awarding whistleblowers a record high of $597 million in fiscal year 2015. Of the total recovered for qui tam cases ($2.8 billion), a record-setting $1.1 billion was recovered in DOJ-declined cases - an unprecedented six-fold increase from the prior record of $173 million in 2011.

Under the FCA, whistleblowers are entitled to prosecute on behalf of the U.S. government even when the DOJ declines to assist with the case. And as credible whistleblower attorneys become more experienced and getting a foothold in FCA courts, private prosecution experienced a windfall this year.

Overall, the DOJ effectively passed up over a billion dollars in FCA cases that private attorneys nevertheless pursued and ended up winning or favorably settling. Yet, rather than suggesting a defect in the system, these figures demonstrate the high-functioning nature of the FCA and its provisions.

Brian Mahany, founder of Mahany Law and counsel for the 2014 record-setting $16.65 billion Bank of America settlement - the largest whistleblower case against a single defendant in U.S. history, explained that with the Justice Department’s increased focus on civil rights cases and domestic terrorism, the private bar has picked up slack on prosecuting False Claims Act cases. “Justice has its hands full and there is no sign of increased funding or more prosecutors,” says Mahany. “With over $1 billion collected last year, the private bar is showing it has what it takes to prosecute these cases.”

Attorney Mahany, author of Saints, Sinners & Heroes: Covert Ops in the Wars Against the C-Suite Mafia, has False Claims Act cases at various stages with whistleblowers residing in more than 20 states. Although Department of Justice rules prohibit comment while lawsuits are under seal, Mahany indicates he will prosecute privately any FCA lawsuits the DOJ elects to decline.

The False Claims Act provides private attorneys with the ability to represent whistleblowers in the pursuit of fraud cases on behalf of the government. Provisions include an extra incentive for private prosecutors who put in the time and risk that it takes to press on with a whistleblower case in the absence of DOJ assistance. The setup also acts to supply the necessary resources to recover government funds where the DOJ resources could not possibly meet the demands of a growing number of cases.

As of this record-breaking year, the days of dropping a whistleblower case due to a DOJ declination letter appear relegated to the past. Data indicates that whistleblower attorneys are no longer daunted by going it alone and seem confident in their ability to successfully obtain recoveries despite a DOJ decline.

According to Mahany, however, the shift to the private bar means that whistleblowers need to be very careful who they hire to represent them. He said, “There are employment lawyers and personal injury attorneys trying to handle these cases. That is great until the government declines. When it comes time to take on a Bank of America or similar big corporation, these lawyers just don’t have the deep bench, experience or resources to go forward. That means an otherwise great case is left to wither.”