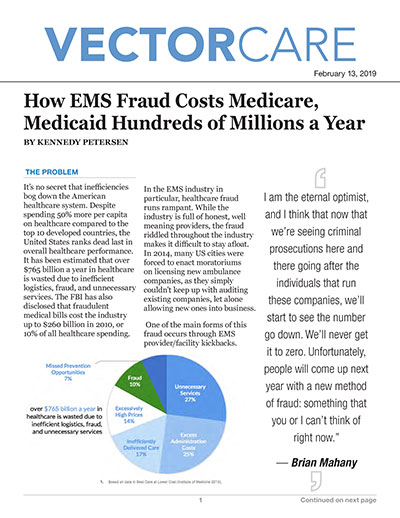 It’s no secret that inefficiencies bog down the American healthcare system. Despite spending 50% more per capita on healthcare compared to the top 10 developed countries, the United States ranks dead last in overall healthcare performance. It has been estimated that over $765 billion a year in healthcare is wasted due to inefficient logistics, fraud, and unnecessary services. The FBI has also disclosed that fraudulent medical bills cost the industry up to $260 billion in 2010, or 10% of all healthcare spending.

In the EMS industry in particular, healthcare fraud runs rampant. While the industry is full of honest, well meaning providers, the fraud riddled throughout the industry makes it difficult to stay afloat. In 2014, many US cities were forced to enact moratoriums on licensing new ambulance companies, as they simply couldn’t keep up with auditing existing companies, let alone allowing new ones into business.

One of the main forms of this fraud occurs through EMS provider/facility kickbacks. Dishonest EMS providers sometimes collaborate with local hospitals to create a kickback arrangement, where the EMS provider receives special treatment in exchange for low-cost services billed to the hospital.

We spoke with Brian Mahany, a Fraud Recovery lawyer who specializes in Medicare/Medicaid fraud, about his expertise on EMS fraud. Mahany explains, “People think of kickbacks as “cash in an envelope” and that’s not the way it usually happens. Some more of preferential treatment or exclusive provider arrangement is what we would say is an illegal kickback.”

In addition to kickbacks, EMS providers can fudge medical necessity documents and charge for unnecessary patient services (whether or not these services were actually provided) in a process known as “upcoding”. As a result of this fraud, a patient who only requires Basic Life Support (BLS) during transport might be charged for Advanced Life Support (ALS) during billing. Without a clear, centralized way to manage facility/vendor interactions, it can be difficult to achieve transparency in billing communications between ambulance companies and their clients. With most information exchange occurring primarily over the phone or fax machine, upcoding and medical necessity fraud can be all too easy to execute.

The Effects of Medical Fraud

When healthcare providers commit Medicare/Medicaid fraud, the entire healthcare ecosystem suffers. Everyone, down to the individual consumer, pays more for health insurance and the care they need.

Though primarily an economic crime, EMS fraud can directly affect patient care. In a highly publicized 2014 verdict, Sacred Heart Hospital was found guilty of paying EMS companies kickbacks to transport patients to their emergency room, despite the fact that another hospital was closer. At the time, Sacred heart was known for unusually high employee turnover, unnecessary patient procedures, and at one particularly gruesome point, a maggot infestation. Despite the significantly worse level of patient care, EMS companies receiving kickbacks would transport their patients to the emergency wing at Sacred Heart.

We may primarily view Medicare/Medicaid fraud as economic crimes, and they certainly are, but is impossible to completely isolate these crimes from patients and patient care.

Lastly, EMS fraud hurts the honest businesses in the industry, of which there are many. When so many providers are accepting kickbacks, it can become impossible for local ambulance companies to compete and turn a profit. By letting EMS fraud run rampant, the healthcare ecosystem makes it near impossible for honest providers to stay afloat and make a living.

Though fraud is a problem across all areas of the healthcare industry, it’s known for being particularly badamong ambulance companies. Part of this can be attributed to the low cost of entry: compared to the cost associated with opening a pharmaceutical company or hospital, starting an EMS company can be relatively low cost.

Additionally, healthcare has long been known for inefficient communication and a lack of logistical transparency. It’s estimated that up to 80% of serious medical errors involve miscommunication between caregivers during the transfer of patients and 86% of general mistakes in healthcare involve some form of administrative error. The system is opaque and lacks proper communication and visibility into day to day operations. Put frankly, it’s easy to commit fraud in such a murky system. To compound the situation, the consequences for committing fraud remain strikingly small:

Mahany explains, “It's relatively easy to start a new EMS business. You try to make a lot of money and “if you get caught you get caught”. The worst that happens if you go out of business, yet in the meantime you’ve pocketed a fair amount of money. I've called the EMS industry “whack a mole”: we go after one and tomorrow someone else has popped up in the same city doing the same thing.”

The Future Landscape of EMS Fraud

Despite this increased focus on auditing, the “whack a mole” game continues and EMS fraud still largely remains unchecked. Yet there has been a recent rise of criminal sentences for healthcare fraud, such as last week, when a physician in Boston was found guilty of false billing practices and sentenced to 6 years in prison. Such criminal convictions are predicted to marginally curb the rising tide of healthcare fraud through the threat of a prison sentence (rather than mere fines), but the general lack of transparency in healthcare coordination means that such fraud is almost impossible to eliminate.

“I am the eternal optimist, and I think that now that we’re seeing criminal prosecutions here and there going after the individuals that run these companies, we’ll start to see the number go down. We’ll never get it to zero. Unfortunately, people will come up next year with a new method of fraud: something that you or I can’t think of right now.” - Brian Mahany

With CMS and insurance companies only able to audit a small amount of companies per year, there simply isn’t the bandwidth to maintain compliance through our current audit system.

One of the main ways which ambulance companies face prosecution is actually through whistleblowing and the False Claims Act. Under the False Claims Act, any employee who reports fraudulent activity which defrauds Medicare/Medicaid can be entitled to compensation (up to 30% of what the government collects from the case) and protected from company retaliation.

When our current system allows certain EMS providers to easily defraud Medicare/Medicaid, our entire healthcare ecosystem suffers, most of all the honest ambulance companies struggling to maintain a profit in a gamed system. In order to thrive, facility/vendor operations must operate under new levels of clarity and accountability, to create a healthcare system that is safe for ambulance companies, taxpayers, and patients alike.