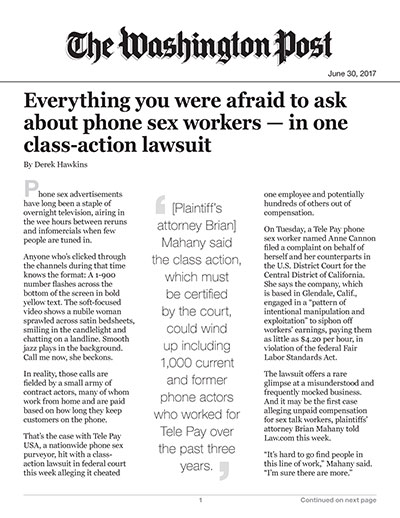 Phone sex advertisements have long been a staple of overnight television, airing in the wee hours between reruns and infomercials when few people are tuned in.

Anyone who’s clicked through the channels during that time knows the format: A 1-900 number flashes across the bottom of the screen in bold yellow text. The soft-focused video shows a nubile woman sprawled across satin bedsheets, smiling in the candlelight and chatting on a landline. Smooth jazz plays in the background. Call me now, she beckons.

In reality, those calls are fielded by a small army of contract actors, many of whom work from home and are paid based on how long they keep customers on the phone.

That’s the case with Tele Pay USA, a nationwide phone sex purveyor, hit with a class-action lawsuit in federal court this week alleging it cheated one employee and potentially hundreds of others out of compensation.

On Tuesday, a Tele Pay phone sex worker named Anne Cannon filed a complaint on behalf of herself and her counterparts in the U.S. District Court for the Central District of California. She says the company, which is based in Glendale, Calif., engaged in a “pattern of intentional manipulation and exploitation” to siphon off workers’ earnings, paying them as little as $4.20 per hour, in violation of the federal Fair Labor Standards Act.

The lawsuit offers a rare glimpse at a misunderstood and frequently mocked business. And it may be the first case alleging unpaid compensation for sex talk workers, plaintiffs’ attorney Brian Mahany told Law.com this week.

“It’s hard to go find people in this line of work,” Mahany said. “I’m sure there are more.”

Mahany said the class action, which must be certified by the court, could wind up including 1,000 current and former phone actors who worked for Tele Pay over the past three years, as Law.com reported.

A representative from Tele Pay did not immediately respond to a message seeking comment.

Cannon, the plaintiff, is an Orlando resident who said she has worked at Tele Pay since 2008, fielding calls on sex chat lines for a fee that goes directly to the company, according to her complaint. She says Tele Pay has been her only employer during that time.

In a typical week she has dozens of sexually explicit phone conversations with Tele Pay customers, averaging about six minutes per call. At that pace, she is paid 10 cents per minute or $6 per hour to talk, according to the lawsuit. If her average falls below six minutes, her rate drops to as little as 7 cents per minute, bringing her hourly pay to $4.20.

The company, on the other hand, charges callers $5 per minute, bringing in as much as $300 per hour based on a phone sex worker’s labor, the lawsuit says.

“For example, even if a call lasts only a few seconds and is never verified as a legitimate call from a customer seeking Tele Pay’s services, it is included in her average call length calculation,” the lawsuit says. “This includes prank callers, dropped calls, technical errors, or even silent calls where no caller can be established.”

On top of that, the lawsuit says, Tele Pay deliberately makes it difficult for workers to track their time to make sure they’re being paid properly. Estimates of average call lengths are posted online day by day, but the real figures are calculated in secret, according to the complaint.

On its website, Tele Pay describes itself as a “booking agent” whose job is to “negotiate and book engagements” for the workers, referred to in its employment materials as actors. The company’s home page encourages phone actors to “SIGN UP now!!!” for “the best opportunity for women and men to work from home.”

“Want to be your own boss? Make your own hours?” reads Tele Pay’s site. “Work for yourself! Never have to punch a time clock again.”

Another section of the site reads: “The fun thing about this type of work is you don’t need ANY experience. All you need is the ability to talk, be motivated, and above everything else be CREATIVE and FUN.”

When phone sex workers do enlist with the company, Cannon alleges, a murky figure known simply as “Don” gives employees advice on how to keep customers on the line.

“He reminds them repeatedly, cajoling them over and over with the telephone sex talk mantra — ‘Remember, it’s not HOW MANY calls you take, but HOW LONG you keep these guys on the phone!'” the lawsuit reads.

Workers are also bombarded with daily emails from Tele Pay urging them to work extra hours, according to the complaint. Cannon says Tele Pay has required her to work more than 40 hours per week, never providing her with a means to accurately track her hours and never paying her overtime.

The lawsuit seeks three years’ worth of allegedly unpaid hourly wages, unpaid overtime and other off-the-clock wages on behalf of Tele Pay workers, which the complaint says are made up almost entirely of women.

“Women are a core part of both the national and global economy. Unfortunately, the abuses and financial exploitation they experience often remain invisible,” the lawsuit reads. “This is especially true for workers in female-dominate sectors of the economy such as sex talk workers. They are hidden from the public eye.”