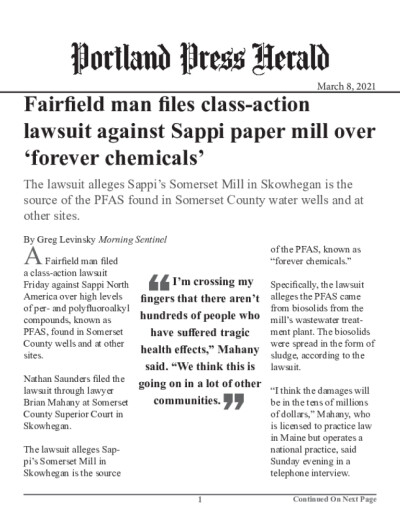 A Fairfield man filed a class-action lawsuit Friday against Sappi North America over high levels of per- and polyfluoroalkyl compounds, known as PFAS, found in Somerset County wells and at other sites.

The lawsuit alleges Sappi’s Somerset Mill in Skowhegan is the source of the PFAS, known as “forever chemicals.”

Specifically, the lawsuit alleges the PFAS came from biosolids from the mill’s wastewater treatment plant. The biosolids were spread in the form of sludge, according to the lawsuit.

Officials with Sappi North America did not reply Sunday night to an email seeking comment.

The lawsuit seeks damages “in an amount to be determined.” It also seeks coverage for property damage, out-of-pocket expenses, personal property damage, loss of use and enjoyment of property, diminution in property value, costs for long-term medical monitoring and other issues.

The lawsuit is a public document and “open to anyone in Somerset County,” Mahany said.

“Plaintiff and the Class Members’ actual and significant exposure to these dangerous levels of PFAS is the direct and proximate result of each of Defendants’ intentional, willful, wanton, reckless or negligent acts or omissions in connection with the use, emission, discharge, disposal, distribution and spraying of PFAS throughout Somerset County,” the lawsuit reads.

“As a direct and proximate result, … Plaintiff and the Class Members are at risk of developing cancer, and other illness, disease and disease processes, resulting in their present medical need for periodic diagnostic medical examinations.”

Introduced in the 1940s, PFAS are a group of man-made chemicals that became widely used in household products for their water, grease and stain-resistant nature.

The “forever chemicals” moniker comes from PFAS’ strong structure, which does not break down easily in the environment or human body.

Exposure to the chemicals can cause health issues, including elevated cholesterol, thyroid disease, damage to the liver and kidneys, adverse effects on fertility and low birth weight, according to studies. Some studies have linked PFAS with an increased risk of certain cancers.

The state of Maine began investigating PFAS contamination in Fairfield wells in February 2020 as a result of retail milk testing.

Since then, the state Department of Environmental Protection has found 29 wells in Fairfield that had levels of PFOA and PFOS, compounds in PFAS, that are higher than the EPA’s maximum limit of 70 parts per trillion.

The lawsuit alleges Sappi knew the discharge had been happening for decades and should have been aware of the dangers.

Saunders filed the lawsuit individually and on the behalf of others with similar experiences, according to the lawsuit.

On Jan. 13, Saunders’ well was found to be contaminated with PFAS at 12,910 parts per trillion.

“The class action is on behalf of all the residents whose water is affected, or who have PFAS in their bodies from whatever source it came from,” Mahany said.

Mahany said he is also going to file individual lawsuits on behalf of people whose health has allegedly been affected by the chemicals. Two people have been identified so far who have lost their kidneys because of the contamination, Mahany said.

“I’m crossing my fingers that there aren’t hundreds of people who have suffered tragic health effects,” Mahany said. “We think this is going on in a lot of other communities.”