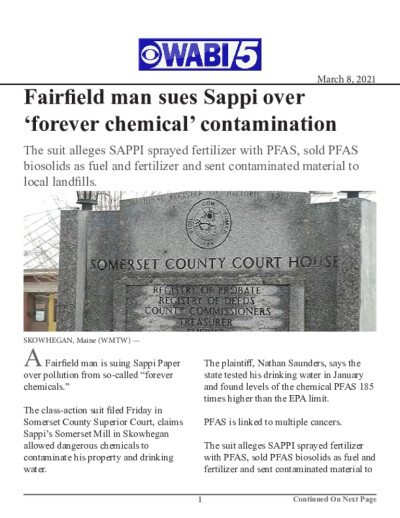 A Fairfield man is suing Sappi Paper over pollution from so-called "forever chemicals."

The plaintiff, Nathan Saunders, says the state tested his drinking water in January and found levels of the chemical PFAS 185 times higher than the EPA limit.

PFAS is linked to multiple cancers.

“It is a ticking time bomb and we don’t know how far it spread. We know that for many years though biosolids were spread all over the state of Maine,” said Brian Mahany, Sauders’ attorney.

Mahany says they’re seeking relief for medical monitoring along with monetary and punitive damages, adding this is the first of several suits.

Olga Karagiannis, spokesperson for Sappi, said in a written statement to the media, “Sappi has not been served with the lawsuit and has not yet had the opportunity to review it in detail. Sappi strongly disputes any contention that Sappi’s Somerset mill is the source of PFAS contamination in Fairfild. Sappi is well known for its record of environmental stewardship at the Somerset mill and at all of its manufacturing facilities.”