In Other News... The saga of United Airlines and Dr. David Dao 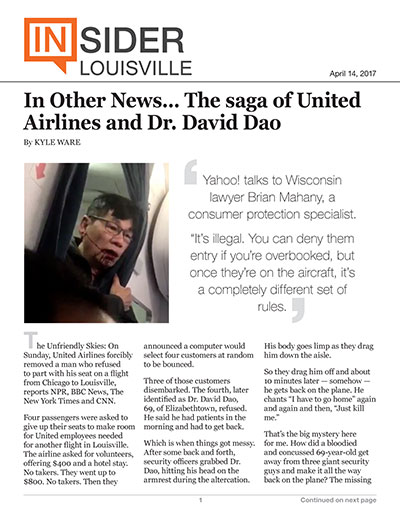 The Unfriendly Skies: On Sunday, United Airlines forcibly removed a man who refused to part with his seat on a flight from Chicago to Louisville, reports NPR, BBC News, The New York Times and CNN.

Four passengers were asked to give up their seats to make room for United employees needed for another flight in Louisville. The airline asked for volunteers, offering $400 and a hotel stay. No takers. They went up to $800. No takers. Then they announced a computer would select four customers at random to be bounced.

Three of those customers disembarked. The fourth, later identified as Dr. David Dao, 69, of Elizabethtown, refused. He said he had patients in the morning and had to get back.

Which is when things got messy. After some back and forth, security officers grabbed Dr. Dao, hitting his head on the armrest during the altercation. His body goes limp as they drag him down the aisle.

So they drag him off and about 10 minutes later — somehow — he gets back on the plane. He chants “I have to go home” again and again and then, “Just kill me.”

That’s the big mystery here for me. How did a bloodied and concussed 69-year-old get away from three giant security guys and make it all the way back on the plane? The missing 10-minutes of Dr. David Dao.

He was held in Chicago for medical attention.

Internet backlash was swift and immediate.

Of course, the whole problem here — he had a ticket.

The Chicago Tribune printed a firsthand account from Jason Powell, a teacher at Louisville’s Male High School, who was onboard flight 3411 with seven students. He says while he was appalled at how the situation was handled, he took solace in the reaction of his fellow passengers.

It gets a little more complicated here, because the flight wasn’t really overbooked so much as United wanted to add people to a plane already filled to capacity.

“The problem was caused by United wanting to add four of their own crew members at the last minute. In the grand scheme of things, that’s not what made this illegal, although it certainly makes it less clear. What makes it illegal is that they allowed the passenger to board.”

United’s response has been, well, interesting. The Washington Post says the first response was this tepid statement:

Flight 3411 from Chicago to Louisville was overbooked. After our team looked for volunteers, one customer refused to leave the aircraft voluntarily and law enforcement was asked to come to the gate. We apologize for the overbook situation.

Hmmm. Yeah. I don’t know. Did you see the video, United? Because…

Then, in a move straight from “Public Relations: How to make things go from bad to downright awful in less than 24 Hours,” CEO Oscar Munoz released his own statement.

“I apologize for having to re-accommodate these customers.”

Is that the corporate equivalent to “I’m sorry you made me hit you?”

By midweek, Munoz had figured it out. He appeared on ABC’s “Good Morning America” and had figured out what a human response looks like and decided to go with that instead of the corporate speak. USA Today reports all passengers on the flight that day will receive a full refund.

So it was rough going for United this week.

And then a couple of days later on another flight, a scorpion fell out of the overhead and stung a guy.

So there’s another method to get people to give up their seats.

NBC News, CNN, and ABC News report a scorpion stung Richard Bell on a United flight from Houston to Calgary. His wife Linda Bell said he felt something fall onto his head and when he reached up to swipe it away, it stung him on his hand. It fell on his lunch tray and he knocked it away again, this time into the aisle, prompting another passenger to shout, “Oh my God, that’s a scorpion.”

Which is about the only thing you can do.

I don’t know if the scorpion counts, but The Los Angeles Times says United also has the worst record for pet deaths for the last two years in a row.

But you wonder what else can happen with United at this point.

“I think corporate America needs to understand that we all want to be treated in the same manner with the same respect and the same dignity that they would treat their own family members. If they do that, wouldn’t it be great? So, will there be a lawsuit? Yeah, probably.”

NBC News says Demetrio says Dao suffered a broken nose, a concussion and lost some teeth in the incident. He may require surgery.

Meantime, United’s stock isn’t faring so well. Fortune says the company took a $1.4 billion tumble on Tuesday and customers continue vows to boycott the airline, though Bloomberg says the mergers of the last few years will make that almost impossible.

It could also hit CEO Oscar Munoz personally. Fortune reports he could lose his $500,000 bonus.

Addus HomeCare Fraud Investigation – Were You Denied Proper Pay?
Mahany Law Announces Addus HomeCare Wage Theft and Employment InvestigationAre or Were You an Employee of Addus Home Care and Aware of Fraud (Including Wage Theft)? We Want to Speak with You – Confidentiality AssuredAddus HomeCare promotes itself as one of the largest home healthcare providers in the United... Read More
More Posts