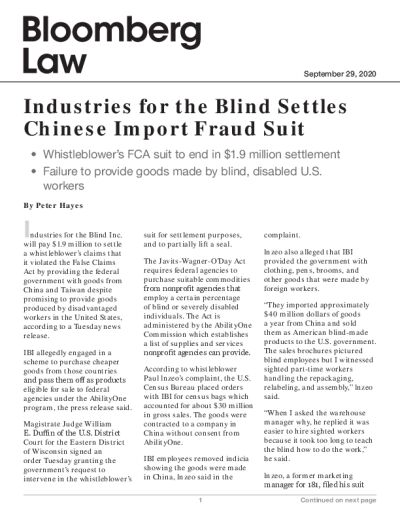 Industries for the Blind Inc. will pay $1.9 million to settle a whistleblower’s claims that it violated the False Claims Act by providing the federal government with goods from China and Taiwan despite promising to provide goods produced by disadvantaged workers in the United States, according to a Tuesday news release.

IBI allegedly engaged in a scheme to purchase cheaper goods from those countries and pass them off as products eligible for sale to federal agencies under the AbilityOne program, the press release said.

Magistrate Judge William E. Duff of the U.S. District Court for the Eastern District of Wisconsin signed an order Tuesday granting the government’s request to intervene in the whistleblower’s suit for settlement purposes, and to partially lift a seal.

The Javits-Wagner-O’Day Act requires federal agencies to purchase suitable commodities from nonprofi agencies that employ a certain percentage of blind or severely disabled individuals. The Act is administered by the AbilityOne Commission which establishes a list of supplies and services nonprofi agencies can provide.

According to whistleblower Paul lnzeo’s complaint, the U.S. Census Bureau placed orders with IBI for census bags which accounted for about $30 million in gross sales. The goods were contracted to a company in China without consent from AbilityOne.

IBI employees removed indicia showing the goods were made in China, lnzeo said in the complaint.

lnzeo also alleged that IBI provided the government with clothing, pens, brooms, and other goods that were made by foreign workers.

“They imported approximately $40 million dollars of goods a year from China and sold them as American blind-made products to the U.S. government. The sales brochures pictured blind employees but I witnessed sighted part-time workers handling the repackaging, relabeling, and assembly,” lnzeo said.

“When I asked the warehouse manager why, he replied it was easier to hire sighted workers because it took too long to teach the blind how to do the work,” he said.