Investing in You: Being a whistleblower has rewards, risks 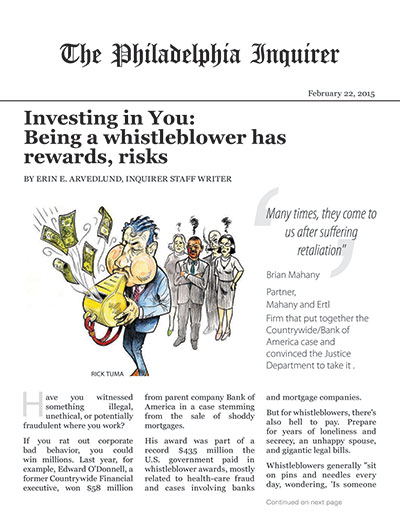 Have you witnessed something illegal, unethical, or potentially fraudulent where you work?

If you rat out corporate bad behavior, you could win millions. Last year, for example, Edward O'Donnell, a former Countrywide Financial executive, won $58 million from parent company Bank of America in a case stemming from the sale of shoddy mortgages.

His award was part of a record $435 million the U.S. government paid in whistleblower awards, mostly related to health-care fraud and cases involving banks and mortgage companies.

But for whistleblowers, there's also hell to pay. Prepare for years of loneliness and secrecy, an unhappy spouse, and gigantic legal bills.

Whistleblowers generally "sit on pins and needles every day, wondering, 'Is someone going to fire me and escort me out the door?' They're going to work every day, trying to do the right thing. Many times, they come to us after suffering retaliation. Then they're fired, shuffled off, demoted. Only then do they file a whistleblower complaint," says Brian Mahany, of Mahany & Ertl in Milwaukee, who put together the Countrywide/Bank of America case and convinced the Justice Department to take it.

You'll be pleased to discover that Philadelphia - yes, our own City of Brotherly Love - is home to one of the country's most active jurisdictions for whistleblower lawsuits.

Why? Federal prosecutors here welcome them.

Zane David Memeger, U.S. attorney for the Eastern District of Pennsylvania, "has lawyers with the experience to move forward," says Mahany.

Still, 75 percent of the lawsuits "go nowhere, and only a fraction win millions of dollars and headlines," says Marc Raspanti, a Center City lawyer specializing in whistleblowers.

"Meanwhile, you risk your career, devote a huge block of your life, sometimes five or 10 years, to something most people never see or understand," says Raspanti, a partner with Pietragallo, Gordon, Alfano, Bosick & Raspanti.

His firm represented Michael Epp, who blew the whistle on fraud by Supreme Foodservice, a contractor to the Department of Defense and coalition troops in Afghanistan from 2005 to 2009.

Supreme paid $389 million in fines under the False Claims Act, a Civil War-era statute. As a result of the suit filed in U.S. District Court in Philadelphia, Epp won $16 million - his portion of the fines.

Of 94 U.S. attorneys' offices nationwide, about a dozen actively investigate and prosecute on behalf of whistleblowers. The Eastern District was "one of the first to do whistleblower work in 1986. There's now a very sophisticated federal bench here, and they seek these cases," Raspanti says.

Witness a suit brought by two Philadelphia doctors against Allergan in 2013.

Several government agencies have whistleblower-award programs, including the Internal Revenue Service and the Securities and Exchange Commission. The biggest payouts come from the Department of Justice. Whistleblowers have collected between 15 percent and 25 percent of any recoveries.

Secrecy is the norm. Under the False Claims Act, the details of 16 suits involving Bank of America and its $17 billion settlement were kept secret and sealed until December.

Now we know that whistleblowers in the case - three former employees and a New Jersey mortgage company, Mortgage Now - shared about $170 million, a new record for the largest award against a single defendant.

When the feds step in, a case can move quickly.

"We began talking with the DOJ in 2013, about what they were looking for in these types of cases," lawyer Mahany recalls of the Countrywide case.

"We got a call from the DOJ on a Sunday night, asking, 'Remember that guy you told us you had at Bank of America? Can you bring him in and get the complaint filed tomorrow?' And we did.

"By and large, every one I've represented, their primary motivation wasn't money," Mahany says.

"Sometimes, you get revenge, as well. That's a powerful motivator."