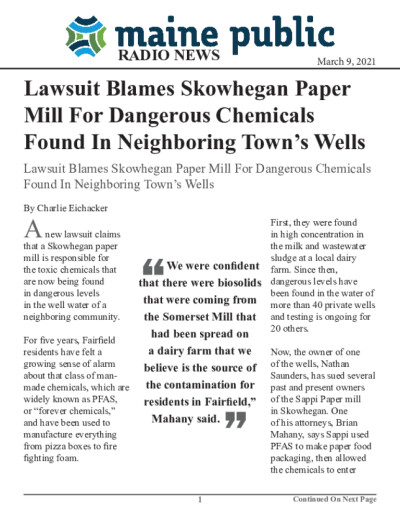 A new lawsuit claims that a Skowhegan paper mill is responsible for the toxic chemicals that are now being found in dangerous levels in the well water of a neighboring community.

For five years, Fairfield residents have felt a growing sense of alarm about that class of man-made chemicals, which are widely known as PFAS, or “forever chemicals,” and have been used to manufacture everything from pizza boxes to fire fighting foam.

First, they were found in high concentration in the milk and wastewater sludge at a local dairy farm. Since then, dangerous levels have been found in the water of more than 40 private wells and testing is ongoing for 20 others.

Now, the owner of one of the wells, Nathan Saunders, has sued several past and present owners of the Sappi Paper mill in Skowhegan. One of his attorneys, Brian Mahany, says Sappi used PFAS to make paper food packaging, then allowed the chemicals to enter the surrounding community as landfilled and composted wastewater sludge.

“We were confident that there were biosolids that were coming from the Somerset Mill that had been spread on a dairy farm that we believe is the source of the contamination for residents in Fairfield,” Mahany said.

In a written statement, Sappi Paper spokesperson Olga Karagiannis denied that the Skowhegan mill is the source of the PFAS contamination in Fairfield and said the company has been an environmental steward at all its mills. She said the company had not been served with the new lawsuit or had a chance to review it as of Monday morning.

David Madore, a spokesperson for the Maine Department of Environmental Protection, said the agency does not currently “have enough information” to say whether the PFAS contamination in Fairfield can be traced back to the Skowhegan mill.

Mahany hopes that other Somerset County residents sign onto the class-action suit and that other communities become more aware about the risk of PFAS contamination. He is seeking financial damages and ongoing medical monitoring for the Fairfield plaintiffs.

The lawsuit also names as a defendant Casella Waste Systems and accuses the company of running a landfill in Fairfield that accepted waste from the Sappi mill that was contaminated with PFAS. A Casella spokesperson, Joe Fusco, said that the company just learned of the lawsuit on Monday and “has never operated a landfill in Fairfield.” He suggested it may have been “incorrectly” named as a defendant.

HUBZone Fraud – Cash Whistleblower Rewards
Do You Have Information about HUBZone Fraud (or any Small Business or Minority Owned Business Designation Fraud)? You May Be Entitled to a Large Cash RewardA private contractor doing work on a multibillion Department of Energy product has agreed to pay $3 million to resolve claims that it falsely presented two... Read More
More Posts