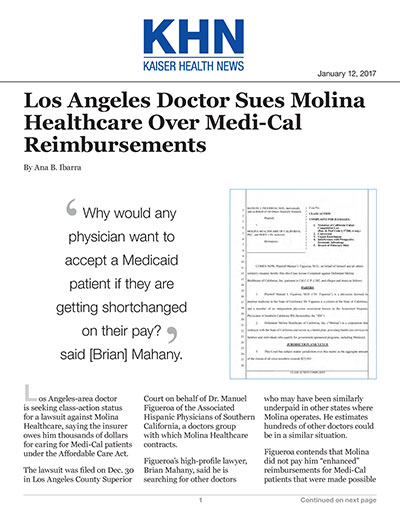 Los Angeles-area doctor is seeking class-action status for a lawsuit against Molina Healthcare, saying the insurer owes him thousands of dollars for caring for Medi-Cal patients under the Affordable Care Act.

The lawsuit was filed on Dec. 30 in Los Angeles County Superior Court on behalf of Dr. Manuel Figueroa of the Associated Hispanic Physicians of Southern California, a doctors group with which Molina Healthcare contracts.

[View the note “Molina Complaint” in its original document context]

Figueroa’s high-profile lawyer, Brian Mahany, said he is searching for other doctors who may have been similarly underpaid in other states where Molina operates. He estimates hundreds of other doctors could be in a similar situation.

Figueroa contends that Molina did not pay him “enhanced” reimbursements for Medi-Cal patients that were made possible by the Affordable Care Act. Under that law, insurers in 2013 and 2014 were to pay doctors higher rates for some types of care for patients enrolled in Medi-Cal, California’s Medicaid program. The enhanced payments program ended in 2014.

“Why would any physician want to accept a Medicaid patient if they are getting shortchanged on their pay?” said Mahany.

The publicly traded insurer, based in Long Beach, operates health plans in 12 states and Puerto Rico covering about 4.2 million people, including 683,000 in California. Most of its members are enrolled in Medicaid or Medicare managed care plans.

Dr. Mario Molina, president and CEO of Molina Healthcare, said he was “mystified” to learn about Figueroa’s lawsuit.

California ranks 47th in the country in reimbursements to doctors for treating Medi-Cal patients, Molina said. “For us, the health plan, [the enhanced payment] was a terrific boon; it was extra money we could pass down to our doctors.”

Consejos de Latinos Unidos, a national consumer advocacy group, recently submitted a letter to the Office of the Inspector General of the U.S. Department of Health and Human Services asking the federal agency to investigate Molina Healthcare for “sitting on federal funds and underpaying Latino physicians and others.” The advocacy group has been investigating the allegations since 2015, according to its CEO and executive director K.B. Forbes.

“Molina appears to be engaged in grossly deceptive and egregious behavior,” Forbes wrote. According to Forbes, who has been in talks with Figueroa’s office, it is estimated Molina Healthcare may still owe Figueroa $15,000 to $25,000.

Forbes said the advocacy group has spoken with other California doctors in a similar position but declined to name them. “We believe this is a pattern,” he said.

Forbes noted that Figueroa’s office also contracts with three other insurance plans, but only had an issue collecting reimbursements for Medi-Cal services from Molina Healthcare.

But Molina says his office has not heard from any other doctors.

“This company was founded by a Latino doctor,” Molina said. “Why would we want to cheat other Latino doctors?”

The lawsuit comes as Molina Healthcare has profited from the Affordable Care Act but also faces an uncertain future amid a planned repeal of the health law. In February, a group of Florida hospitals sued the insurer for allegedly underpaying for emergency room care.

Molina Healthcare profits totaled $143 million in 2015, more than double the profits of 2014, according to its most recent financial report.