Molina Accused of Underpaying Thousands of Doctors in California 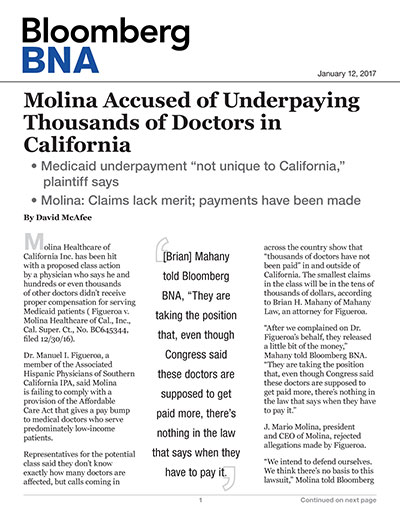 Molina Healthcare of California Inc. has been hit with a proposed class action by a physician who says he and hundreds or even thousands of other doctors didn’t receive proper compensation for serving Medicaid patients (Figueroa v. Molina Healthcare of Cal., Inc., Cal. Super. Ct., No. BC645344, filed 12/30/16).

Dr. Manuel I. Figueroa, a member of the Associated Hispanic Physicians of Southern California IPA, said Molina is failing to comply with a provision of the Affordable Care Act that gives a pay bump to medical doctors who serve predominately low-income patients.

Representatives for the potential class said they don’t know exactly how many doctors are affected, but calls coming in across the country show that “thousands of doctors have not been paid” in and outside of California. The smallest claims in the class will be in the tens of thousands of dollars, according to Brian H. Mahany of Mahany Law, an attorney for Figueroa.

“After we complained on Dr. Figueroa’s behalf, they released a little bit of the money,” Mahany told Bloomberg BNA. “They are taking the position that, even though Congress said these doctors are supposed to get paid more, there’s nothing in the law that says when they have to pay it.”

J. Mario Molina, president and CEO of Molina, rejected allegations made by Figueroa. “We intend to defend ourselves. We think there’s no basis to this lawsuit,” Molina told Bloomberg BNA in a Jan. 5 phone interview. “The company was founded by a Latino physician. I’m a Latino physician. Why on earth would we want to target and discriminate against other Latino physicians?”

Mahany says Molina has promised to fulfil its legal obligations but hasn’t given a timeframe for the disbursements. He expressed skepticism about that position.

“Who knows when they’re going to pay? The money has been owed since 2013,” Mahany told Bloomberg BNA. “It’s now four years later, and these doctors still aren’t getting paid what they’re supposed to be paid.”

He added that, while Molina may call these “delayed payments,” an extended period of time is the only difference between a delay and a default.

Molina rejected Mahany’s characterization of the dispute. He said the payments have been made under the now-defunct ACA Rule 1202, which provided supplemental payments to primary care doctors for certain services.

“We paid doctors based on claims for services in 2013 in 2014 for these augmented payments. They’ve been paid,” Molina said. “We paid the providers in 2014 because the money wasn’t released to us until 2013. It’s now three years past the expiration of that program, and by now all the claims should have been submitted and paid.”

Molina said the company even gave doctors the opportunity to resubmit claims if they thought they should have been paid. He also noted that “not all services qualified.”

In response to Molina’s comments, Mahany stated again that the company did release some of the funds “after several complaints.”

“The company incorrectly takes the position that Congress gave no deadlines as to when the money must be paid,” Mahany told Bloomberg BNA.

Molina added that part of the confusion may arise from the fact that the company contracts with individual doctors, as well as medical groups and independent practice associations (IPAs).

“Some doctors have two contracts with us, and they’re confusing the payment streams,” Molina told Bloomberg BNA. “It could be that the group was paid and the doctor is confused about the payments. If he was contacted through a group, we would have made the payment to the group and then they pay the doctor.”

Molina has only been hit with one complaint so far—in California—but Mahany and his team are exploring additional actions in Texas, Ohio, South Carolina, Florida, Illinois, Washington, Mississippi, New Mexico and Puerto Rico. The ACA is a federal statute, so it is likely Molina engages in the same behavior elsewhere, Mahany noted.

“I do think this isn’t unique to California,” he said.

He added that Molina’s practices are “hurting the doctors that are trying to serve the most underserved and poorest populations.”

Molina said claims in other states would be similarly meritless. Molina sells insurance in fifteen states, according to its website.

“Since we’re not doing it anywhere, it’s not likely we’re doing it elsewhere,” he said. “I think this is an unfortunate misunderstanding with this particular provider, and Molina would never do anything to try to withhold payments that doctors deserved.”