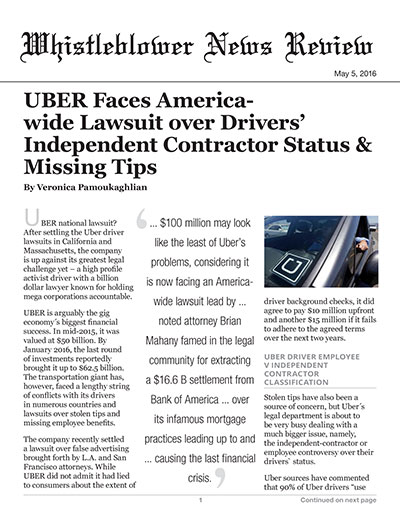 UBER national lawsuit? After settling the Uber driver lawsuits in California and Massachusetts, the company is up against its greatest legal challenge yet – a high profile activist driver with a billion dollar lawyer known for holding mega corporations accountable.

UBER is arguably the gig economy's biggest financial success. In mid-2015, it was valued at $50 billion. By January 2016, the last round of investments reportedly brought it up to $62.5 billion. The transportation giant has, however, faced a lengthy string of conflicts with its drivers in numerous countries and lawsuits over stolen tips and missing employee benefits.

The company recently settled a lawsuit over false advertising brought forth by L.A. and San Francisco attorneys. While UBER did not admit it had lied to consumers about the extent of driver background checks, it did agree to pay $10 million upfront and another $15 million if it fails to adhere to the agreed terms over the next two years.

Stolen tips have also been a source of concern, but Uber's legal department is about to be very busy dealing with a much bigger issue, namely, the independent-contractor or employee controversy over their drivers` status.

Uber sources have commented that 90% of Uber drivers “use Uber is because they love being their own boss,” and that they cherish “personal flexibility” well over the set wages, schedules, and benefits they would receive if they achieved employee status.

In California and Massachusetts an Uber lawsuit over the debated issue was just settled, resulting, among other things, in the company agreeing to facilitate the tipping of drivers. Uber will pay $100 million to 385,000 plaintiffs in the lawsuit. While it did not agree to reclass drivers as employees, Uber will no longer be able to fire drivers at will.

But the $100 million may look like the least of Uber’s problems, considering it is now facing an America-wide lawsuit lead by none other than noted attorney Brian Mahany famed in the legal community for extracting a $16.6 billion settlement from Bank of America in a whistleblower case over its infamous mortgage practices leading up to and to some extent causing the last financial crisis.

Mahany is representing Lorri Trosper, a former Uber driver who was seriously injured in an accident while driving for Uber. According to the text of the complaint Mahany just filed on behalf of Trosper, "Every moment that she works for Uber is directed and monitored by Uber. She does nothing in her day-to-day work activities that would evidence her being independent of Uber. All that she does in her job is controlled by Uber. She is not independent of Uber but is an employee of Uber."

On the one hand, Trosper alleges that she earned gratuities which Uber either stole from her or dissuaded customers from giving her. On the other hand, she claims that when she was injured, and disabled as a result of the injuries, Uber offered no compensation insurance coverage and sent her on her way with hopes that she had good coverage of her own.

The Class Action has been filed under the Fair Labor Standards Act. This means that drivers will have to connect through Trosper’s legal team at Mahany Law for a critical mass of drivers on their side in order to strengthen the complaint and gather more leverage. Based on previous experiences of collective action, it is expected that about a quarter of former Uber drivers and 10-15% of current drivers will quickly join in.

So far, Uber has been treating lawsuits as a hazard and comparatively modest cost of a thriving business, paying hefty settlements and moving along. However, the scope of the new Class Action might pose a different kind of problem for the company. While the common belief is that Uber will never agree to admitting drivers’ employee status, Mahany, who uses Uber frequently, thinks otherwise, “I don’t want to hurt the service. But sooner or later somebody’s going to tag them in court for their mistakes and then we’re all going to have to sit down and work this out.”