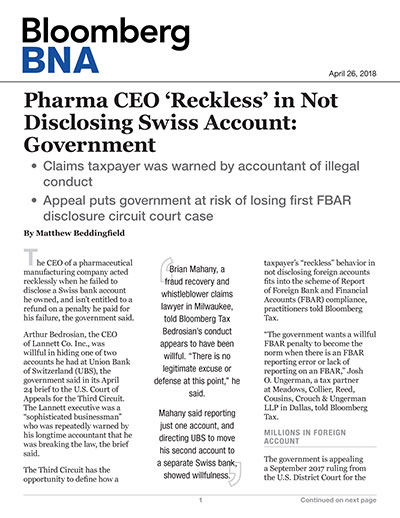 The CEO of a pharmaceutical manufacturing company acted recklessly when he failed to disclose a Swiss bank account he owned, and isn’t entitled to a refund on a penalty he paid for his failure, the government said.

Arthur Bedrosian, the CEO of Lannett Co. Inc., was willful in hiding one of two accounts he had at Union Bank of Switzerland (UBS), the government said in its April 24 brief to the U.S. Court of Appeals for the Third Circuit. The Lannett executive was a “sophisticated businessman” who was repeatedly warned by his longtime accountant that he was breaking the law, the brief said.

The Third Circuit has the opportunity to define how a taxpayer’s “reckless” behavior in not disclosing foreign accounts fits into the scheme of Report of Foreign Bank and Financial Accounts (FBAR) compliance, practitioners told Bloomberg Tax.

“The government wants a willful FBAR penalty to become the norm when there is an FBAR reporting error or lack of reporting on an FBAR,” Josh O. Ungerman, a tax partner at Meadows, Collier, Reed, Cousins, Crouch & Ungerman LLP in Dallas, told Bloomberg Tax.

The government is appealing a September 2017 ruling from the U.S. District Court for the Eastern District of Pennsylvania that Bedrosian was entitled to a refund of the FBAR penalty he paid for not disclosing a $2 million UBS account.

“I liked the district court’s opinion because it was the first court that was willing to draw a line between recklessness and negligence,” Zhanna A. Ziering, a tax member at Caplin & Drysdale Chartered in New York, told Bloomberg Tax. Ziering called the government’s appeal a “risk” because it has so far won all the FBAR cases at the circuit court level and the Bedrosian case is very “fact-specific.”

The lower court found that the government didn’t meet its burden of proving that Bedrosian willfully omitted his $2 million UBS account from his 2007 FBAR, and said evidence pointed to the omission being an oversight or negligent act. Bedrosian’s failure to report the second account wasn’t willful because he checked the box indicating he had a foreign account on his 2007 tax return, identifid Switzerland as the country in which the account was located, and filed a FBAR for 2007 stating he had assets in a foreign account, the federal district court said.

The government is arguing on appeal that the federal district court ruling was based “on a perceived lack of evidence that Bedrosian intended to evade tax.” The lower court, therefore, imposed a higher standard of willfulness that went beyond the ordinary standard of knowing reckless conduct, the government said.

“The District Court departed from the correct standard of willfulness by improperly focusing on whether Bedrosian had an improper motive or bad intent when he failed to disclose his $2 million UBS account,” the government’s brief said, adding that the applicable standard is whether Bedrosian’s conduct was “knowing or reckless.”

No Excuse or Defense

Brian Mahany, a fraud recovery and whistleblower claims lawyer in Milwaukee, told Bloomberg Tax Bedrosian’s conduct appears to have been willful. “There is no legitimate excuse or defense at this point,” he said.

“Based on the government’s brief, the government is trying to get the circuit court to clearly adopt a move from ‘willfulness’ into ‘recklessness’,” Ziering said. “If the court agrees, a taxpayer’s intent will become irrelevant.”

The government asked the Third Circuit to reverse the lower court’s ruling, and remand the case so the federal district court could “address Bedrosian’s arguments regarding the amount of the penalty.”