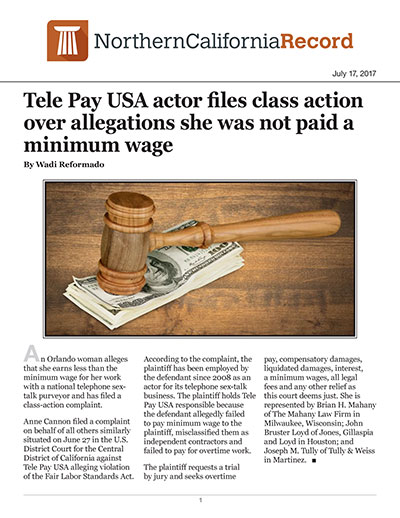 An Orlando woman alleges that she earns less than the minimum wage for her work with a national telephone sex-talk purveyor and has filed a class-action complaint.

Anne Cannon filed a complaint on behalf of all others similarly situated on June 27 in the U.S. District Court for the Central District of California against Tele Pay USA alleging violation of the Fair Labor Standards Act.

The plaintiff requests a trial by jury and seeks overtime pay, compensatory damages, liquidated damages, interest, a minimum wages, all legal fees and any other relief as this court deems just. She is represented by Brian H. Mahany of The Mahany Law Firm in Milwaukee, Wisconsin; John Bruster Loyd of Jones, Gillaspia and Loyd in Houston; and Joseph M. Tully of Tully & Weiss in Martinez.