On Labor
by Hannah Belitz, May 4 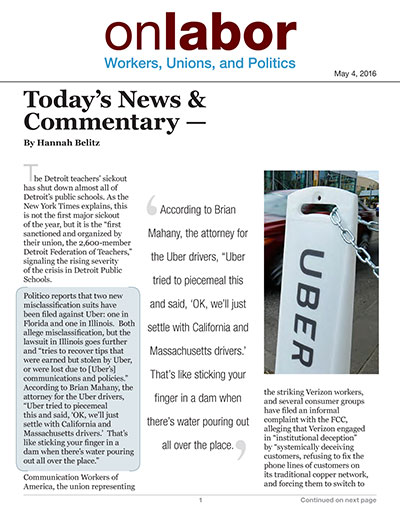 The Detroit teachers’ sickout has shut down almost all of Detroit’s public schools. As the New York Times explains, this is not the first major sickout of the year, but it is the “first sanctioned and organized by their union, the 2,600-member Detroit Federation of Teachers,” signaling the rising severity of the crisis in Detroit Public Schools.

Politico reports that two new misclassification suits have been filed against Uber: one in Florida and one in Illinois.  Both allege misclassification, but the lawsuit in Illinois goes further and “tries to recover tips that were earned but stolen by Uber, or were lost due to [Uber’s] communications and policies.”  According to Brian Mahany, the attorney for Uber drivers, “Uber tried to piecemeal this and said, ‘OK, we’ll just settle with California and Massachusetts drivers.’  That’s like sticking your finger in a dam when there’s water pouring out all over the place.”

Communication Workers of America, the union representing the striking Verizon workers, and several consumer groups have filed an informal complaint with the FCC, alleging that Verizon engaged in “institutional deception” by “systemically deceiving customers, refusing to fix the phone lines of customers on its traditional copper network, and forcing them to switch to the company’s fiber network or lose all service.”  According to the New York Times, Verizon executives have denied any deception and claim that “the complaint [is] a bargaining tactic” by the striking union.  The union, for its part, has said that it simply wants customers to “be able to make this choice without pressure, threats and deception from Verizon.”

In international news, the Washington Post reports that May Day protests in Paris turned extremely violent, highlighting deeper social and economic problems in France.  France’s current unemployment rate is slightly above 10 percent, just below its record high in the mid-1990s.  The Post notes that similar protests were held around the world, and although May Day, or International Workers’s Day, usually brings protests, the ones this year “seemed to be marked by a particular fervor and a palpable sense of unrest.”