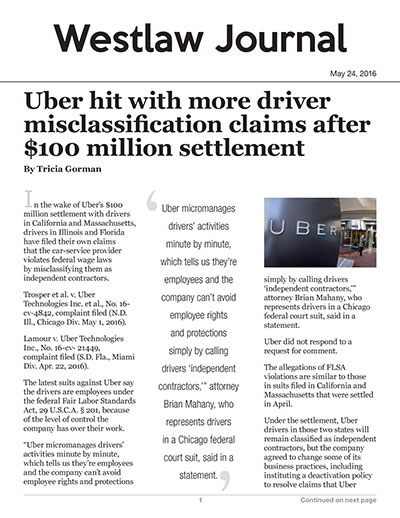 In the wake of Uber’s $100 million settlement with drivers in California and Massachusetts, drivers in Illinois and Florida have fied their own claims that the car-service provider violates federal wage laws by misclassifying them as independent contractors.

The latest suits against Uber say the drivers are employees under the federal Fair Labor Standards Act, 29 U.S.C.A. § 201, because of the level of control the company has over their work.

Uber did not respond to a request for comment.

The allegations of FLSA violations are similar to those in suits fied in California and Massachusetts that were settled in April.

Under the settlement, Uber drivers in those two states will remain classifid as independent contractors, but the company agreed to change some of its business practices, including instituting a deactivation policy to resolve claims that Uber randomly terminated drivers.

The day after San Franciscobased Uber announced the settlement, Miami resident Jean Lamour sued the company in the U.S. District Court for the Southern District of Florida.

The drivers accuse the company of cheating them out of customer tips and failing to reimburse them for employment-related expenses. Uber has taken away the customary 20 percent tip by telling its customers there is no need to directly tip the drivers because a gratuity is already included in the total cost of the car service, the suits say.

The suits allege Uber’s level of control over the drivers makes them employees, not independent contractors.

In an interview with Westlaw Journals, Mahany said Uber’s steps to address driver disputes on a piecemeal basis — settling with drivers in two states and moving for arbitration in others — simply encourages the fiing of similar suits by drivers seeking to be paid at least minimum wage.

The company will eventually have to address the larger, underlying issues in the suits, he said.

“Uber isn’t going to be able to continue to resolve every case, one of the cases — ours or some future suit — will ultimately force the company to sit down and fiure out how to solve the issues,” Mahany said.”Fixing the minimum wage problem could be as easy as allowing customers to add a tip when they book a ride.”

The collective actions fied in Illinois and Florida are just the latest claims seeking unpaid wages and other damages from Uber.

While Uber argues that the drivers agreed to arbitrate disputes in their latest contract signed in December, the drivers say arbitration is not mandatory, pointing out that the plaintiff and 240 other drivers opted out of the provision.