EBN
by Sheryl Smolkin, May 10 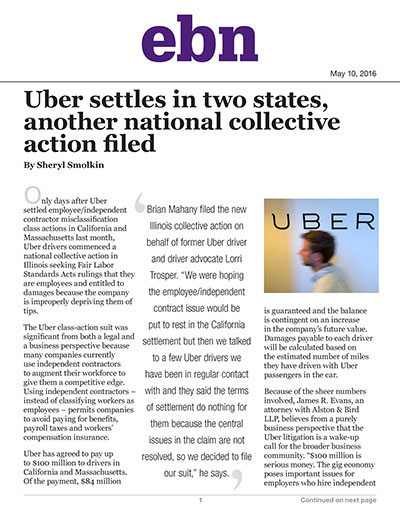 Only days after Uber settled employee/independent contractor misclassification class actions in California and Massachusetts last month, Uber drivers commenced a national collective action in Illinois seeking Fair Labor Standards Acts rulings that they are employees and entitled to damages because the company is improperly depriving them of tips.

The Uber class-action suit was significant from both a legal and a business perspective because many companies currently use independent contractors to augment their workforce to give them a competitive edge. Using independent contractors – instead of classifying workers as employees – permits companies to avoid paying for benefits, payroll taxes and workers’ compensation insurance.

Uber has agreed to pay up to $100 million to drivers in California and Massachusetts. Of the payment, $84 million is guaranteed and the balance is contingent on an increase in the company’s future value. Damages payable to each driver will be calculated based on the estimated number of miles they have driven with Uber passengers in the car.

Because of the sheer numbers involved, James R. Evans, an attorney with Alston & Bird LLP, believes from a purely business perspective that the Uber litigation is a wake-up call for the broader business community. “$100 million is serious money. The gig economy poses important issues for employers who hire independent contractors,” he says. “I think they need to revisit the true nature of these relationships and how much control they exercise as employers. If they look and feel like employee relationships, employees should be treated accordingly.”

On the class-action website, employee counsel Shannon Liss-Riordan explains that drivers who have driven more than 25,000 miles will likely receive $8,000 or more on average. Drivers who drove fewer miles will receive lower shares. The formula also accounts for the state where the drivers worked (more of the settlement is allocated for California), whether they were included in the certified class and if they opted out of the Uber arbitration clause.

In addition, Liss-Riordan says that the defendant company has agreed to implement a number of policy changes. For example, Uber will no longer be able to deactivate drivers at will. “They will only be able to fire them for cause after warnings and not for low acceptance rates,” she says. “An appeal process will also be established and a Drivers Association with leaders elected by their peers will be set up to bring driver concerns to management.”

Going forward, claims that Uber has not been remitting tips will be short-circuited by permitting drivers to put small signs in their cars stating that "tips are not included, they are not required, but they would be appreciated." “By Uber making clear to riders that tips are not included, we believe that many riders will begin tipping their Uber drivers fairly because until now they have been under the impression that tips are included in the fares based on the company’s prior communications,” Liss-Riordan says.

“The cost of reclassifying these folks as employees would be enormous."

Milwaukee-based attorney Brian Mahany filed the new Illinois collective action on behalf of former Uber driver and driver advocate Lorri Trosper. “We were hoping the employee/independent contract issue would be put to rest in the California settlement but then we talked to a few Uber drivers we have been in regular contact with and they said the terms of settlement do nothing for them because the central issues in the claim are not resolved, so we decided to file our suit,” he says.

Liss-Riordan acknowledges that some drivers may be disappointed that the class-action suit did not go to trial, but she believes the settlement her firm has negotiated for Uber drivers throughout California and Massachusetts justifies this compromise (which will not result in the drivers being reclassified) because it provides significant monetary and non-monetary benefits that will improve their work lives. In addition, she points out that if the case had proceeded to trial there were considerable risks that the courts would not side with the drivers.

Evans agrees that it would have been risky for both sides to go to court for a ruling. “Once the court passes on the question, it’s over in the sense that there will be a dispositive ruling on the question. It may not be binding on future courts but it certainly will be persuasive,” he says.

He also doubts whether employee status is what most Uber drivers really want. Based on anecdotal conversations with many Uber and Lyft drivers, Evans says that what they like most about the job are the features that ultimately make classifying them as independent contractors correct. “They love the flexibility to set their own schedule. If they want to make a few bucks they can just turn on the app and go out and pick up a few fares,” he says.

He also suggests that the Uber business model will not work if drivers are characterized as employees. “The cost of reclassifying these folks as employees would be enormous. They would be entitled to minimum wage, overtime, meal and rest periods, paid sick leave in some states and workers’ compensation,” he says.