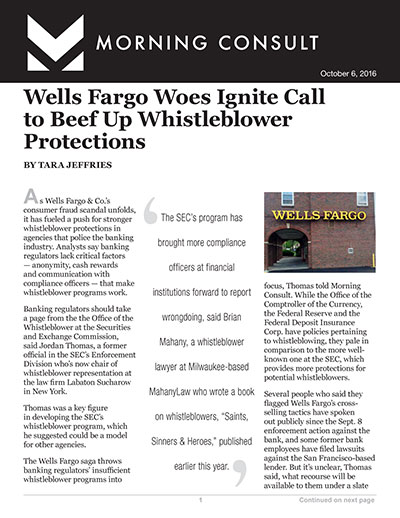 Banking regulators should take a page from the the Office of the Whistleblower at the Securities and Exchange Commission, said Jordan Thomas, a former official in the SEC’s Enforcement Division who’s now chair of whistleblower representation at the law firm Labaton Sucharow in New York.

Thomas was a key figure in developing the SEC’s whistleblower program, which he suggested could be a model for other agencies.

The Wells Fargo saga throws banking regulators’ insufficient whistleblower programs into focus, Thomas told Morning Consult. While the Office of the Comptroller of the Currency, the Federal Reserve and the Federal Deposit Insurance Corp. have policies pertaining to whistleblowing, they pale in comparison to the more well-known one at the SEC, which provides more protections for potential whistleblowers.

Several people who said they flagged Wells Fargo’s cross-selling tactics have spoken out publicly since the Sept. 8 enforcement action against the bank, and some former bank employees have filed lawsuits against the San Francisco-based lender. But it’s unclear, Thomas said, what recourse will be available to them under a slate of state and federal laws.

It’s particularly important to offer whistleblowers the option to report violations anonymously, a key tenet of the SEC’s program. “This is something where having a program where people felt safe to report would have made a difference,” said Thomas, who wrote about the issue in a New York Times opinion piece last week.

Banking regulators should also focus on employment protections and monetary awards, he said. The SEC’s program has given more than $100 million in awards to whistleblowers in the five years since it was created. It’s cracking down on practices like secretive employment agreements that aim to block workers from reporting wrongdoing.

That’s a shift that has occurred in the last six months, which he attributes to the SEC placing more responsibility on compliance officers to report misconduct. “It’s a new dynamic,” he told Morning Consult. “Instead of waiting to be fired, these people, who are trained know what to look for and could potentially be responsible, are coming forward.”

The Wells Fargo scandal could cause regulators to look to a whistleblower provision embedded in a 1980 law, Mahany said. Tucked in to the Financial Institutions Reform, Recovery and Enforcement Act, or FIRREA, is a whistleblower provision that has a low burden of proof and a 10-year statute of limitations, which he said “prosecutors love.” Its only drawback is a low cap on monetary rewards.

One problem with SEC’s whistleblower program is that enforcement officers only act on a limited number of cases that come in, “far less than 1 percent,” Mahany said. “Most of the cases that come in are either called in or somebody writes a letter, and it’s not going to get investigated.”

An SEC spokeswoman disputed that characterization.

“Every whistleblower tip that is submitted to the Commission is reviewed by the Enforcement Division,” Jane Norberg, director of the SEC’s Office of the Whistleblower, said in a statement to Morning Consult. “Enforcement staff examines each tip to identify those with high-quality information that warrant the additional allocation of Commission resources.”

In the banking world, the Consumer Financial Protection Bureau may be the agency that is best equipped to handle whistleblower complaints. The CFPB first heard about the Wells Fargo fraud in mid-2013 through whistleblower tips, Director Richard Cordray said at a Sept. 20 Senate Banking Committee hearing. He said the agency is increasingly hearing from whistleblowers in various cases.

But Republicans such as House Financial Services Committee Chairman Jeb Hensarling (Texas) and panel member Rep. Scott Garrett (N.J.) have repeatedly decried what they see as regulators’ inaction, casting the CFPB as lax at picking up the bank’s misconduct.

Thomas questioned whether the CFPB has the necessary tools in its arsenal to have jumped on that kind of case earlier. He says all agencies should be “empowered” to establish fully fleshed-out whistleblower programs. “It’s hard to argue with the fact that they didn’t catch the fraud early in the process,” he said. “I think the question is whether they had the tools to detect this kind of thing.”

Progressives have also emphasized the need for whistleblower protections in the wake of the scandal.

“It’s kind of tragic that it takes a low-level employee risking his or her career to break open the wrongdoing at Wells Fargo,” Amit Narang, regulatory policy advocate at the left-leaning advocacy group Public Citizen, told Morning Consult. “It does beg the question of whether we need to have a broader whistleblower regime. Does CFPB have a robust enough whistleblower program?”